What a month September has been. While it has been wonderful for us, with family celebrations and getaways, it has also been traumatic with the news of the devastation brought by hurricanes Irma and Maria to the Caribbean islands. Add to this the 2 earthquakes that rocked Mexico in as many weeks, and it was enough to render us speechless.
As some of you may know, the Caribbeans and Mexico are destinations close to our heart, places where we sailed to on our previous boat and where we spent over 18 months combined. I feel a little guilty for saying this, but we lived some of our most memorable cruising moments there, and to witness the destruction of such beautiful places just broke my heart.
We still have a few friends there, some on land some on boats and a lot of our thoughts have been with them lately. Going over news feeds and messages, has invariably led to the uncovering of old photos and diary posts, bringing back sweet memories of cruising encounters, explorations and of course, feasts.

A few days ago, I came across an article I wrote in our old sailing blog entitled “ 10 ways to eat fish “. This was back in the days, when I was new to blogging and I was focusing more on the travelling and sailing aspect of our cruising life rather than the culinary side. We had completed the crossing of the Atlantic Ocean, as part of the ARC, a 200+ fleet of cruising boats from the Canaries to St Lucia. Spirits were high and life was good! 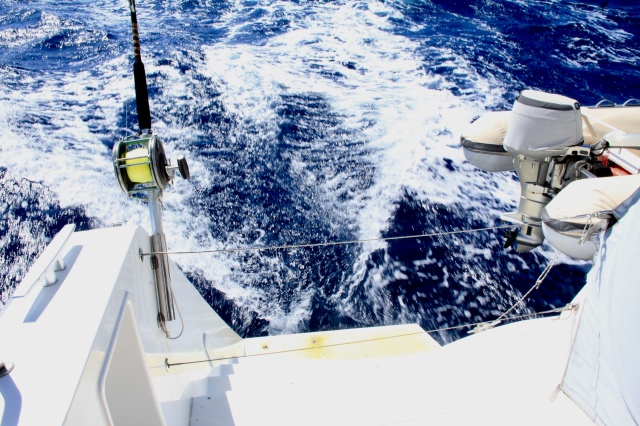 The fishing rods were always at the ready…

The piece had a link to a note written earlier for the ARC daily logs, where every participating boat was encouraged to post as it allowed people on land to share the fleet’s lives on board. Subjects were varied: some crew wrote about sea conditions or mechanical issues, I mostly mentionned fishing and food. here is an extract of the log in question:

Marc’s fishing efforts were rewarded in the afternoon with another mahi- mahi,1,10mt long, nearly as big as the first one. At the risk of sounding spoiled, I must say we are
reaching saturation with fish dinners, and after keeping enough for one
last feast of fish and chips tonight, the rest has gone in the freezer. I
suggested it was time to put the rods away, since we have more fish than we
can eat, but boredom must have set in, as I heard the whizzing sound of the
lines going in this morning. Marc claims he needs a fresh catch everyday so
that he can have fish tartare!
Of all the fish recipes, this is our family favourite: it takes 10mn to
make, no cooking involved (precious in this hot weather), and can be
prepared in advance and kept in the fridge. So here goes.

Fish Tartare is still our favourite fish recipe. We like to refer to it as “Boat food” as it has always been the way to prepare freshly caught fish on board. But it can easily be prepared on land, where I often call it “ Pantry food “ since we always have the ingredients on hand either in the fridge or in the pantry. Just add any firm fish: tuna, wahoo, mahi-mahi,…the sauce is also great served on the side with sashimi or carpaccio. 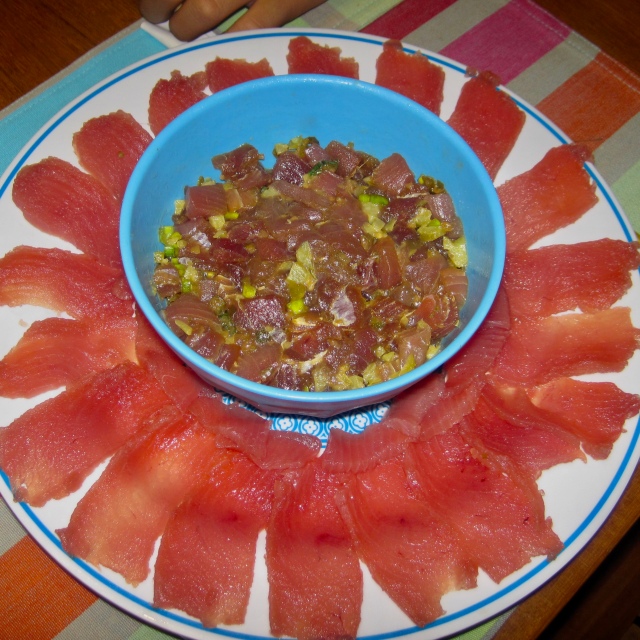 Seared tuna with tartare sauce, served with cucumber and guacamole