Everytime we go away, I make sure there is enough food in the house for the kids to eat. Mostly I cook meals in advance for them to reheat, but I also leave them ingredients to prepare for themselves, should they have the urge. Items like eggs, milk, rice and fruits are staples in our house and generally disappear very quickly.

Such was the case when we came back from our last trip away, apart from some Bosc pears that sat there looking pretty on the kitchen bench. Apparently, I was told, the whole setting looked like a still life and nobody wanted to disturb the scene, in case I planned to take a photograph. Of course, it prompted me to grab the camera and capture the perfectly shaped fruits before deciding to eat them.

I didn’t wanted to have them plain however, so ended up roasting them in honey and saffron and served with autumn spiced yoghurt after coming across a recipe found in a recent issue of Gourmet Traveller magazine. It was originally meant as a simple dessert to be eaten warm, but in our house it was a perfect breakfast served cold. Don’t worry about the amount of honey used in this recipe, any leftover pan juice makes a great syrup to drizzle on pancakes or plain yoghurt ( or both!) 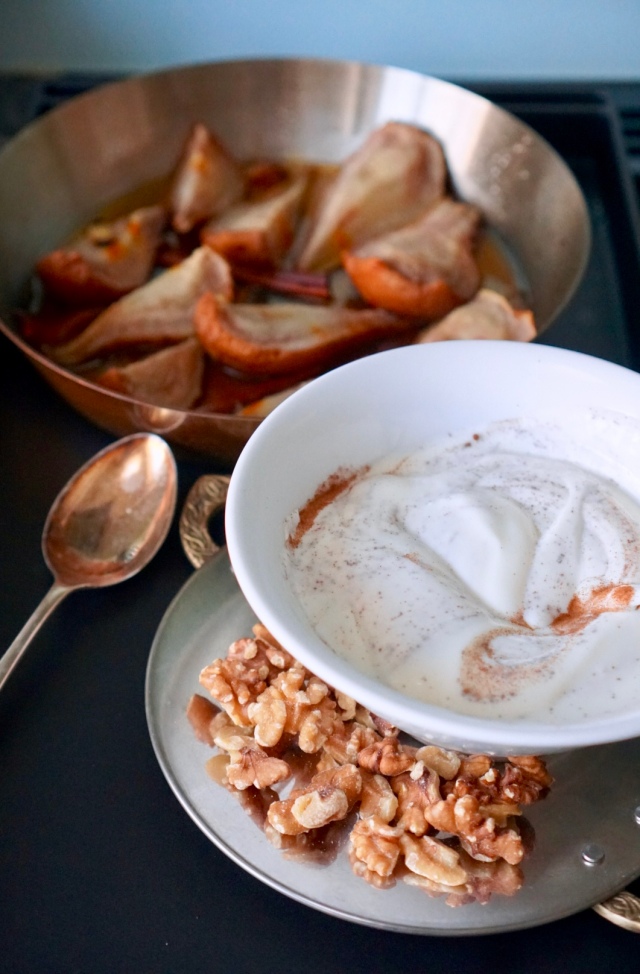 Serves 4 as breakfast or dessert

← Flying away to Mudgee: dumplings, wines and a hangar house.
Mudgee on a rainy day: museum, ​wine and beer tasting, fine dining. →

One Comment on “Honey and Saffron Roasted Pears with Spiced Yoghurt”