Aussie breakfast food: Weet-Bix and what to do with leftovers

Last Sunday morning, I found a note on the kitchen bench. “Mum we are out of Weet-bix”. For the uninitiated, Weet-bix is a breakfast cereal biscuit made of wheat and not much else beside a little bit of sugar. My kids (as do a lot of Aussie kids) love it and have grown up on the stuff. Personally I don’t understand how they like it so much, as I think it tastes like cardboard and only find it palatable when bathed in yogurt and a good dose of honey. It is an acquired taste, very much like vegemite and I can only explain the attraction by the fact that it has been one of the first solid food they were given as babies. They did take a liking to French baguettes and croissants when introduced to them as toddlers, but by then, their habits were set and I must admit that in the morning it’s far more convenient to grab the bottle of milk and a handful of Weet-bix than defrost a baguette (if we’re lucky enough to have some on hand!)

So how do we do our Weet-bix? Marc will have at least 5 with cold milk. Terry will top 2 or 3 with sliced bananas or sultanas and milk, while Anne prefers hers with yoghurt and maple syrup. I only ever ate them regularly when I was pregnant with Marc 18 years ago, and had this craving for Weet-bix, sliced kiwi fruits and greek yoghurt. Never been able to go back to it since, at least not as a breakfast cereal.

This doesn’t mean I don’t find a use for Weet-bix. The crumbs are what I am after and I wait patiently for the box to reach near emptiness to collect the crushed up biscuits and incorporate into my cooking. The family thinks I am nuts for keeping a container of broken Weet-bix, “throw it out” they say. But they also know that I hate waste and somehow will always try to make use of unwanted produce ( though I assure you I do throw bad food away!). When baking, I will partially substitute crushed wheat for flour in crumbles, muffins and cakes. It adds texture and crunch to savoury recipes like stuffing, meatballs or gratins. My kids also like how it makes their smoothies thicker.

So, back to last Sunday, faced with an entire bowl of crushed Weet-bix taking up valuable space in the pantry I decided to bake muffins. My go to recipe is Banana Muffins but since we also had ran out of bananas ( that’s what having teenagers in the house does to your supplies!) I directed my attention to a can of peaches, one of the many remnants from the boat which are very quickly approaching their Best Before Date. A quick search on the Weet-bix website yielded a super easy recipe which I adapted slightly to suit the ingredients on hand. The result was surprisingly good: quite moist, not overly sweet, a delightful whiff of cinnamon…it certainly tasted very nice freshly out of the oven. While the kids wolved a couple of them down plain, I found I enjoyed mine better topped with cream cheese and maple syrup icing. Nice treat with a cup of coffee for me, easy breakfast on the go for the kids, perfect size for lunch boxes…my version of waste not want not.

** Weet-Bix can be found in France and the USA labelled as Weetabix. And I just found out that the Chinese are going nuts over it since it was prominently featured in a popular Chinese TV drama paying as much as $50 for a box that retails for $5 in my local supermarket! I wonder how they do their Weet-Bix in China… 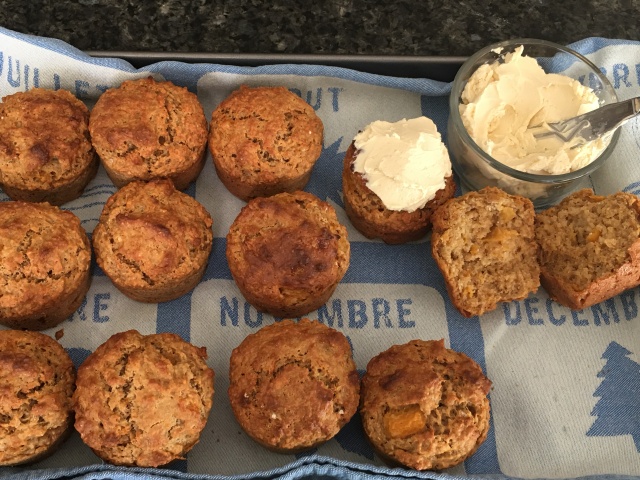