Remembering our cruising days in Brazil

Two recent events have caused me to feel quite nostalgic lately and longing for our past cruising life.
First, was us attending the Sydney Boat Show last weekend. While we are not currently in the market for a new sailing boat since selling our beloved VOAHANGY ( and Terry is plenty busy with our new charter venture), we like to keep in touch with new developments and people in the boating industry. The Lagoon team has been such a big part of our cruising life, we have made friends with a few of the staff over the years and when we received an invitation from their Australian distributors to attend the launch of their latest model, the Lagoon 42, we jumped at the opportunity to catch up over French Champagne and canapes! So many familiar and new faces, old stories were (re)told, plans were hatched, inevitable questions were asked ( So, when are you going again? ), and of course, we had to inspect the new boats. There is nothing like the smell and feel of a brand new yacht, and wandering around the galley of the L42 felt like being back home (though a smaller version of the L560). I even started to rearrange the table setting much to the embarrassment of my daughter who stopped me saying “Mum, what are you doing?!”. Yes, I am incorrigible and I either need help or a new Lagoon (or both!) What a great night it was and needless to say that not a day has passed since when I don’t miss our floating home.

Another trigger has been the incessant media frenzy over the imminent Olympic Games in Rio. All this talk of Brazil is reminding me of our unforgettable trip there back in 2007. In these days, we were sailing our Lagoon 500 back from France, and had joined the Rallye des Iles du Soleil, a french organisation gathering 35 cruising yachts travelling from the Canary islands to Brazil. The main reason we joined the rally was not only for the companionship and fun of being surrounded by other family boats, but the itinerary that year included dream destinations like Cape Verde, Senegal, and the Amazon river which we would have been hesitant to navigate on our own. As a family with young children ( Marc was 9, Anne was 4) already involved in boat readiness, homeschooling, and maintenance it was a massive relief to know that some logistical issues such as cruising permits, escort mothership, security, and cultural excursions were taken care of. Fast forward 8 years, and when asked about our preferred cruising destination, Brazil remains my absolute favourite. For the record, Terry’s is the Inside Passage in Alaska, while Marc and Anne can’t decide between Mexico and the US East Coast.

It should not come as a surprise then, that August has been declared Brazilian month in our house. From samba music playing in the background, to weekly latin american dinners, it is a trip down memory lane for us…One which I would like you to join me on for the next few weeks, with a recipe or two and as a bonus, in each post, I will attach an excerpt of a log entry from some of the books I kept back in these “blogless” days. We used to email these updates to family and friends, so while some of you may remember receiving these a long time ago, it will be news for a lot of you (albeit old news!).

Let’s kick off with our arrival in Salvador da Bahia after crossing the Atlantic from Senegal. 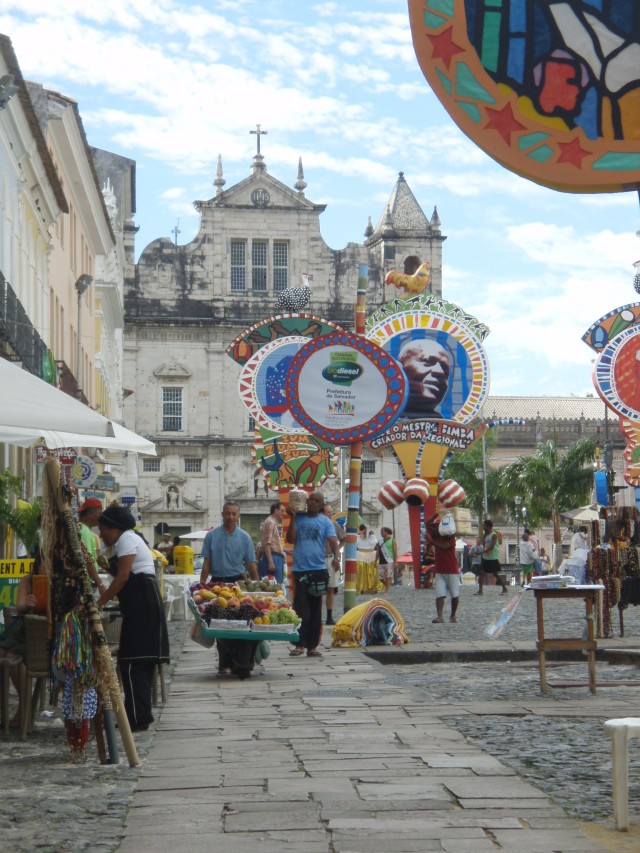 Salvador da Bahia, Brazil
December 17-26, 2007
After spending 12 days at sea, finding ourselves in a city of 2.4 million people is pretty overwhelming. And it’s not just adjusting to crowds again. The week flew by in a flurry of boat repairs (at least organizing them!), catching up with the arriving rallye boats (most had arrived by the end of the week), and most of all, prepare Christmas. The kids had put the pressure on during the Transat, while we were counting the days before arriving to Brazil; they counted the days till Christmas.

I can hardly describe the feeling of being in a place like Salvador at Christmas time. The city is a buzz of activity. It is described in the guide books as the African soul of Brazil, due/thanks to its large population of African slave descendants. This translates in everyday life as the most vibrant place we’ve ever been so far. Remember the 5.45am call to prayer in every Turkish town? Well in Salvador, we have the 6am samba drum wake up call!!! Strangely enough, we don’t mind: the sun is already up by then, it is the coolest part of the day, and it’s such happy music we find ourselves shuffling over breakfast.
The city sits at the mouth of the Bay of all Saints, and was built on a cliff top facing the sea. It is divided in two levels: the lower city and the upper city.
The marina is located in the lower city, next to the ferry terminal, financial district and Elevator Lacerda which takes us to the historical center thru a 72m vertical cement shaft in 20 seconds! The historical centre houses countless baroque churches (365 according to popular belief), museums, and other colonial buildings, much of them renovated and painted in bright pastels. In the middle of it is the area known as the Pelourinho, a Unesco-declared World Heritage site. Pelourinho means “stone column”, mounted in the public square with a bronze pendant for publicly tying and whipping criminals and rebellious slaves. As the first capital of Portuguese America, Salvador was doing a thriving business in slave trading and had its “pelos” installed in open and central places. As a pelourinho was a symbol of authority and justice, it ended up lending its name to the historical and architectural part of the city. Another reminder of Salvador’s past as the place with the largest percentage of African slaves brought into Brazil, is the Mercado Modelo, only meters from the marina. It’s now a tourist market, but back in the 1860’s it was the Customs House and had the dubious task of storing shipments of new slaves in the watery depths of the building. Apparently you can tour the basement of Mercado Modelo, which we declined to do.

As we are in one of the most popular area with tourists, we were immediately drilled by the RIDS organizers on the precautions to take when going out: no jewellery or watches, no bags either, only take the cash you need, one credit card at a time, don’t walk alone at night,…Evidently there is poverty and misery right outside the marina gate. It’s different to Senegal though. First impressions are of a modern city full of people going about their work in shops, banks, offices, we could be in Cairns CBD. However, walking in the back streets, we come across kids begging for 2 reals (50 cents), dilapidated buildings, men collecting empty cans for reselling,…No one really comes up to ask during the day, but we were warned that come darkness, the more desperate come out and muggings are quite common. Sadly some members of the RIDS would tempt fate and go out on Christmas night, only to be robbed of their passports and cameras, one of the ladies even ending up with a broken finger trying to hold on to her purse! So, armed with all this knowledge, we set out to visit the city during the day and socialize on the pontoon at night. Unfortunately, the safety issues make it impossible to carry any camera, let alone take photos, so you will have to do with my descriptions.
Wherever you go, there is music, young people practicing capoeira moves, black women wearing big white dresses, street vendors offering sugar cane juice or coco gelado (cold young coconut). And let’s not forget the smells of tropical fruits, dende oil (local palm), coconut cream… 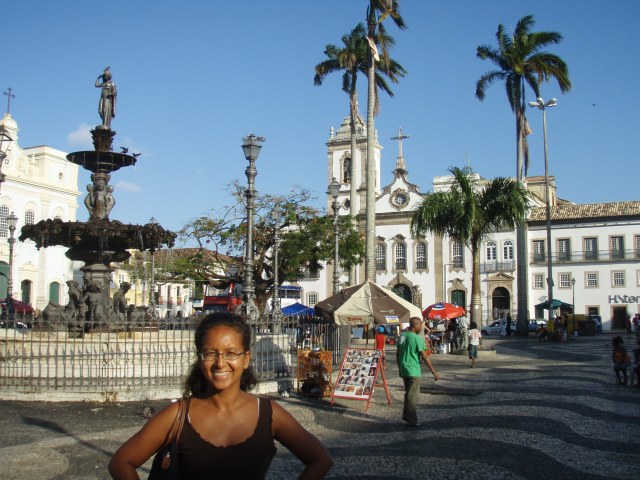 In the Pelourinho, surrounded by 17th century churches 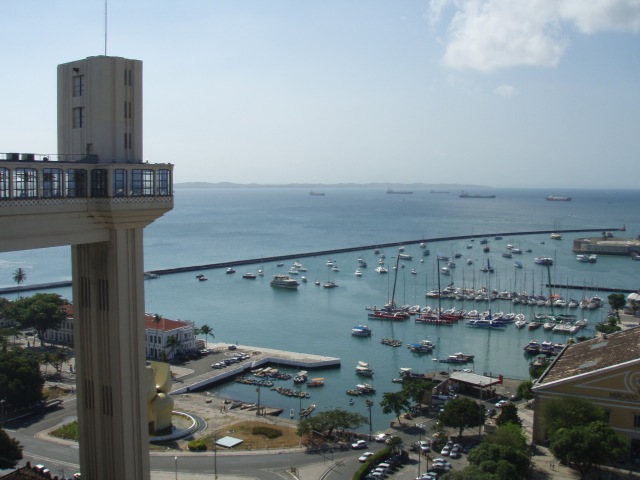 Overlooking the marina, from the upper city. The Elevator is on the left

Coconut drinks for sale at the beach

Praia Porto da Barra, the closest to the city 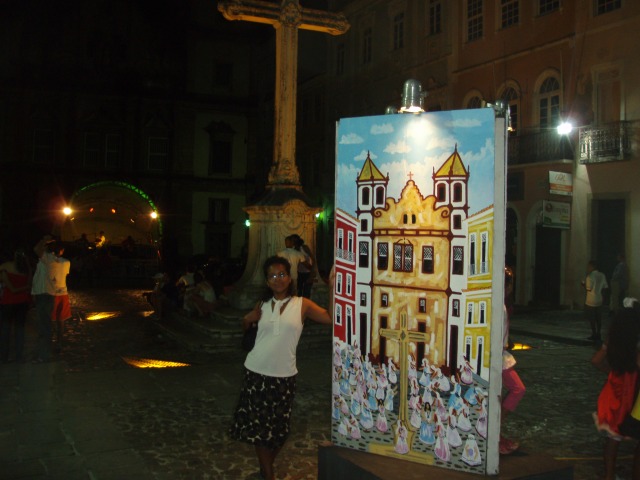 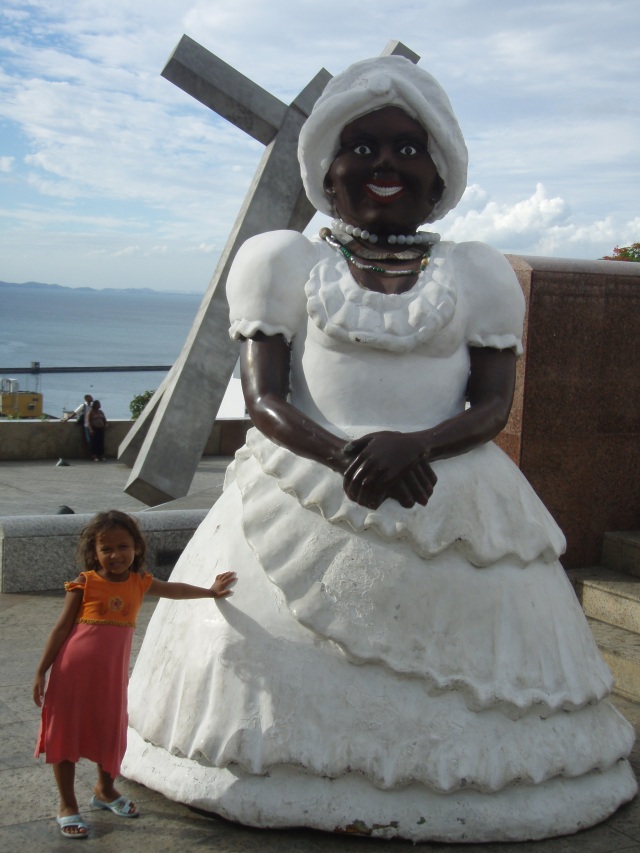 Onto the cooking. Both following recipes are adapted from Cook Brazilian by Letitia Moraines Schwartz. I found the book in Australia,  a few years after our return on land and spending a long time trying to recreate brazilian dishes by memory.

Prawns with hearts of palm and tomatoes

Hearts of palm are widely used in Brazil and are easily found fresh all over the country. I used to keep some tinned on the boat and use them in salads, after rinsing them well. In Australia, they are available in specialised grocery stores. I cook the prawns in their shells as I like to munch on the crispy tails and slurp on the juice. But that’s me, so feel free to peel and devein them is you prefer.

In this recipe, the most time consuming task is the dicing of the capsicums, but you can slice them instead if you are in a hurry. I like to use flathead fillets, but any thin piece of fish is suitable. In Brazil, they crumb the fish with fuba, which is like fine polenta. I had left over arepa from the boat ( corn flour bought from Colombia, yes, more left over!) so I used that but really polenta will be just fine! The veggies and the sauce can be prepared ahead of time so it is a very quick and easy dinner to put together.

500g flathead fillets, skinned and boned (ask your fishmonger to do it for you)
100g polenta
3 tbsp grapeseed or olive oil

← Aussie breakfast food: Weet-Bix and what to do with leftovers
Once we went to Rio… →