Imagine our place a few days ago: it’s summer school holidays, the house is full of teenage girls hanging out by the pool or the trampoline, the dog is running around like crazy relishing the extra attention, I am pottering around keeping a loose eye on the group. Earlier that afternoon, Anne came and asked if the friends could stay for dinner. Mr T smiled and nodded “ Sure, we’ll order pizzas for everyone !” Anne replied “ Actually, my friends have been following Mum’s instagram posts and been envious of my school lunches, so they would love to try some of your cooking. Can you make dinner then? Please. “ How could I say no to that? In these days of people commenting on teenagers eating habits, reportedly binging on processed food or not eating at all…this was music to my ears. To have kids who like eating home cooked food!

So, after checking for allergies and intolerance ( none! ), special diets ( none either, phew! ) and dislikes ( they were too polite to mention, god bless them! ) I settled on a menu inspired by the traditional French celebration of the Epiphany.
For these of you unfamiliar with this, Epiphany Day is a Christian custom that marks the time between the birth of Christ and the coming of the Magi – the day when the 3 Wise Men, led by the Star of Bethlehem visited baby Jesus bearing gifts exactly 12 days later. Remember the song “ The 12days of Christmas ”? In France it is also known as La fete des Rois ( King’s Day ) and is typically celebrated with a feast eating the “galette des rois” ( the cake of the kings).
Though it traditionally falls on January 6, because it is not a public holiday, the feast day occurs on the first Sunday of January, when families gather around the table. It is the opportunity to play the game of “tirer les rois” ( pick the kings ) with much protocol, where a figurine called “feve” is hidden in the cake and the person who gets it becomes the King or Queen of the day. He or she will wear a paper crown and chose his/her queen/king. French children love it! Because it is a fun tradition and the cake is so delicious, most people want to repeat the feast more than once so it is not unusual to “tirer les rois” several times over the course of 2 or 3 weeks!
A traditional galette is a puff pastry cake filled with frangipane ( a creamy mix of almonds, butter, eggs and sugar ) and served with either cider or champagne. While it is widely available in bakeries and patisseries in France thoughout the month of January, unfortunately it is harder to find anywhere else ( including Australia ) so I always make my own version whenever I we celebrate ( not every year as it turned out…) In my early cooking days in Australia, I used a dry bean for the feve, then over time, gathered a collection of porcelain figurines, most sent over by my mother who always include them along with paper crowns in her Christmas parcel. This is much to Mr T and the kids’ concern, who always worry about cracking a tooth biting into the feve!

Anyway, back to dinner for the teenage girls. With dessert sorted, I decided to keep the meal simple with a slow roast lamb and a colourful salad. The lamb was simply smothered in herbs and olive oil, and left in the oven for a couple of hours.
The salad is one of my favourite “throw in whatever is in the fridge” kind of meal, the only rules being that it has to be bright and there must be something greens, something filling, something creamy, something crunchy, and a little spicy. So in went the mesclun mix for greens, roast sweet potatoes for filling, capsicum for colour, fresh ricotta for creaminess, roasted pumpkin seeds fro crunch and chopped shallots for a bit of heat. A generous splash of EVO on the lot, added the right amount of unctuosity and a side serve of tomato and red onion salsa substituted as a dressing. I did provide some slices of french baguette to mop up any juices, but hardly anyone touched them as they were saving themselves for the cake.

Dinner was a success, judging by the girl’s comments ( “this salad is really good! “ “love that cake!” ) and the only one slice of cake left. For the record, Marc was crowned King and picked his sister as his Queen. Yes, it is awkward, but no more than having to choose one of the other girls. At least he didn’t hide the feve and pretend to not have it in order to avoid to choose a queen, as i have seen some people do…

This recipe is from 365 good reasons to sit down and eat, by Stephane Reynaud.

It is very easy, provided you let the almond cream filling cool down enough so it is a thick spread that will keep within the pastry round. I made the mistake of pouring it while still warm and runny, and it went everywhere! As I didn’t have enough ingredients to start again, I went ahead covering the pastry and chilling it in the freezer for 20 minutes to solidify the almond cream a little. Unfortunately the pastry was unable to seal properly and the frangipane overflowed while cooking. While presentation is not that great and the galette is much flatter than planned, the taste was still great! 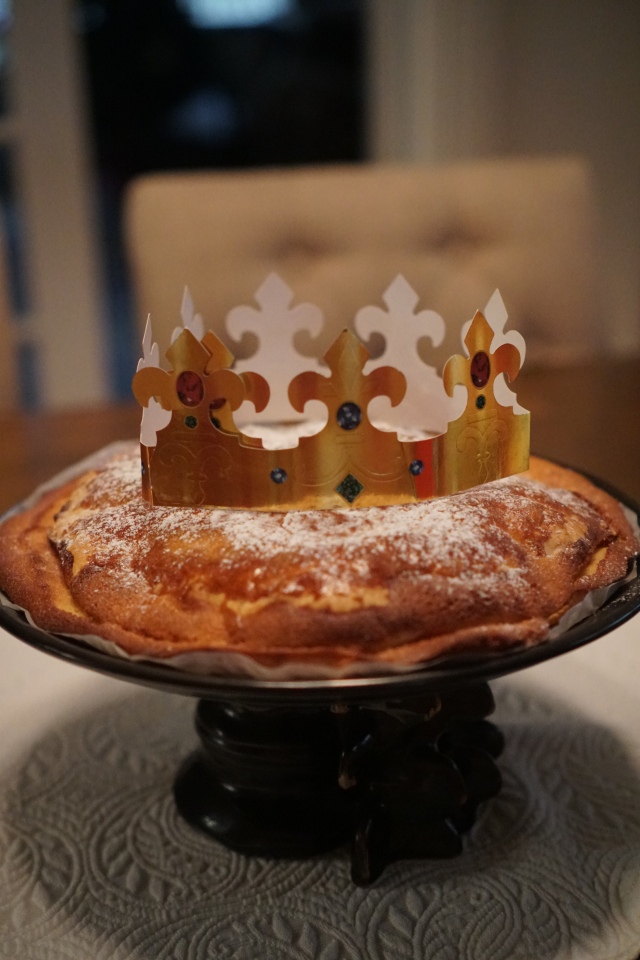 Ingredients:
100g ground almonds
100g caster sugar
100 butter, softened ( the original recipe says melted, but I found that made the paste too runny)
2 eggs + 1 egg yolk, lightly beaten
bitter almond extract
2 sheets store-bought butter puff pastry, each cut into a round
1 tbsp icing sugar
1 feve ( porcelain charm to hide in the cake. Use a dry bean, if porcelain is unavailable or if you worry about chipping a tooth!)

This is a template more than a recipe.The ingredients really depend on what is available at the time and variations are endless: substitute baby spinach leaves for mixed greens, ordinary potatoes for sweet potatoes, carrots for capsicums, sour cream for ricotta, walnuts for seeds, chili for shallots…you get the idea. And the quantities are pretty loose too, they will vary to individual taste.

For the green base: 1 bag (50g?) mixed salad leaves
For the filling: 750g sweet potatoes, peeled, cubed and roasted
For the colour: 1 red caspicum, trimmed and roughly diced
For the creaminess: 1 cup of fresh ricotta
For the crunchiness: 1 cup of toasted pumpkin and sunflower seeds
For the spiciness: 2 shallots trimmed and sliced
For the moisture: 1/4 cup of extra virgin olive oil and a splash of red wine vinegar.

← A weekend getaway at the Shangri-La, Sydney
A day in Launceston, Tasmania: hike, taste wine and dine. →