A weekend getaway at the Shangri-La, Sydney

21 years ago, Mr T and I said “I do” on December 21st. And every year, we find a way to celebrate on what is either the longest or shortest day of the year, depending on which hemisphere we find ourselves living at the time.
This year, being in Sydney and working over the festive season, we brought the celebration forward and decided on a staycation at the Shangri-La hotel in the city. For these of you not in the know ( and that was me until a few weeks ago ), a staycation is defined in the Oxford Dictionary as “A holiday spent in one’s home country rather than abroad, or one spent at home and involving day trips to local attractions “. I believe in the old days, we would have called it a “weekend city getaway” or something like that but I am trying to keep up with the trend…

The Shangri-La is located on the edge of Sydney harbour, in the historic Rocks district. It is one of Sydney five star hotels, and staying here is definitely a treat with fantastic views across the harbour and a first class restaurant Altitude. We actually dined at Altitude earlier this year, during Sydney’s Vivid festival: it was my way of convincing agorophobic Mr T to enjoy the lights display, from the comfort of a dining room high up on the 36th floor! We had a terrific night, a romantic dinner followed by a long cab ride home…during which we agreed that it would be nice to stay over next time so that we could stagger only a few floors to bed and wake up to that spectacular view!

While deciding on the hotel accomodation was easy, choosing a restaurant for dinner proved a challenge. There are literally dozens of fantastic establishments in the city, but Mr T’s criteria can be pretty strict at times: we need to have a great view or a killer menu, preferably both. And take reservations, or at the very least offer a bar where to sit and drink while you wait for a table. Oh, and noise levels have to allow for comfortable conversations. Then the kids (who I believed to be busy either working or partying that weekend) declared themselves free and keen to accompany us! Seeing how this getaway was taking quite an unexpected turn, we decided to go with the flow and make it a bit of a shopping trip and family lunch with Anne and Marc, sending them home afterwards while Mr T and I would stay back at the hotel for the night.

Not without giving them a peek preview of the room first! We were lucky enough to be granted early check-in, so that we could drop our overnight and shopping bags on our way to lunch. One look at the near-panoramic view of Sydney Harbour, and all the kids could say was “ Wow!”, followed by “ why can’t we stay with you?” by Anne who loves hotel stays. “ Because we have plans “ was my answer, “part of which is to take you on a walk across the bridge for lunch. You can see it from here!” 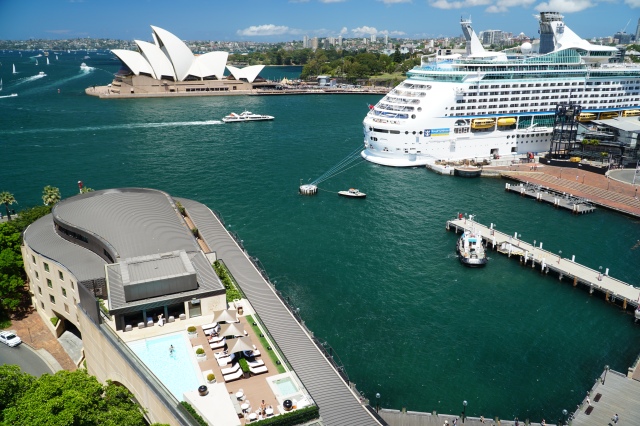 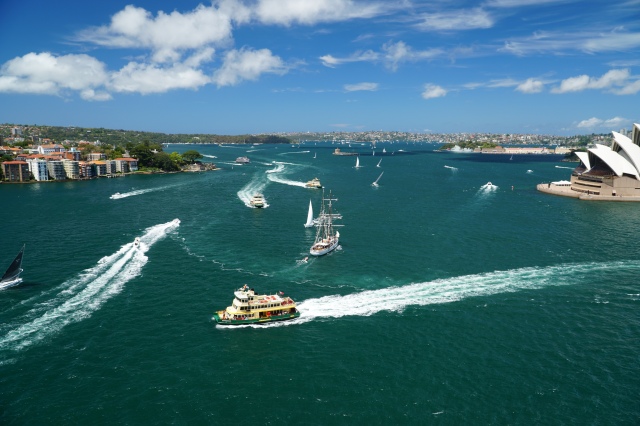 We booked a table at Ripples in Milson’s Point, across the bridge, where I had previously lunched at with my parents and friends. It seemed to tick all the boxes: views, nice food, relaxed outdoor setting next door to Luna Park amusement park…the sort of place where I like to take visitors. Only, it was a very busy Sunday, a month before Christmas and it seems that all of the North Shore had decided to come down as well. The restaurant was packed, our table reservation was for 2.30pm and as we arrived 15 minutes early, we ( along with several other diners ) were asked to wait until the designated times. That was Ok with Mr T, until he realised that the waiting “ area“ was outside and there was no bar where to sit and drink, just the concrete bollards by the wharf. I nearly lost him at the adjoining Aqua restaurant, a much more upmarket version of Ripples…”with a bar!”

Once seated, service was prompt and friendly with our waitress very efficiently keeping Mr T’s drinks flowing. The menu leans towards mediterranean fare with a lot of Italian influence. For starters we ordered 2 plates to share: Beef Bresaola Carpaccio and Buffalo Mozzarella. 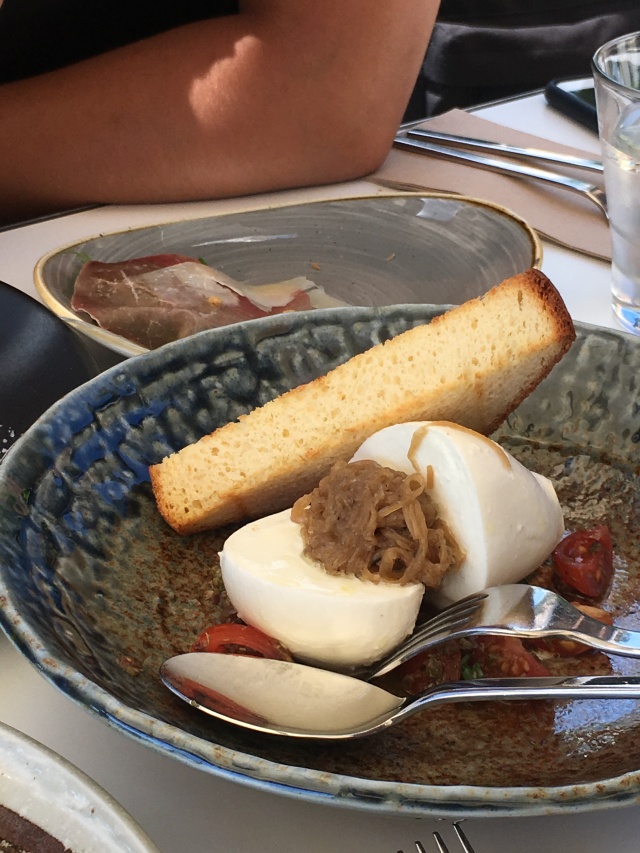 The first, came with pine nuts, cornichons, shaved parmesan and lemon dressing. The other is served as a big ball of mozzarella cheese split in half with onion marmalade, cherry tomato salad and toasted brioche. We all loved the flavours and finished these in no time ( the kids were hungry after their walk across the bridge!)

The choice of mains was fairly simple: no one was in the mood for red meat or roast chicken, so the boys played it safe and ordered fish and chips

, Anne surprised me by selecting rigate pasta which is full of mixed seafood and botarga in a napolitana sauce ( that’s quite a departure from the usual steak and fries!) and I went down the “gourmet” road by picking the pork belly served with caramelised peach, buckwheat and creme fraiche. The pork was fork tender and the skin text-book crispy.

When the dessert time comes, we were suitably full and all we could manage was affogato, the dessert you have when you don’t have room for dessert! The boys and I had fun selecting different liqueur to accompany the ice cream and coffee: Frangelico for Marc, Kahlua for Mr T and Amaretto for me.

Unable to find anything she liked on the menu, Anne asked for a plain bowl of vanilla ice cream, her favourite in any circumstances. She’s easy to please!

As no one was willing to walk back across the bridge after lunch, we hopped on the ferry instead which is a mere 10 mn ride across the harbour, sailing under the bridge and along the opera house before landing in Circular Quay.

This is where we bid goodbye to the kids and headed back up the hill to the Shangri-La.

I reckon these rooms are made to stay in: I could sit on the lounge and sip a drink watching traffic go by on Sydney harbour for hours. As a matter of fact, I decided to do just that, as I got a new camera for early xmas present so I set up my gear and film cars, boats, and planes crossing the bridge, plying the waters or flying over the city. Seen from the comfort of a 13th floor hotel room, commuting traffic looks quite fascinating…and these city lights!!

I would have been quite content to order room service and watch the night sky but Mr T was feeling peckish and wanted to try the hotel all-day restaurant. Cafe Mix was very quiet on this Sunday night, and the atmosphere was fairly laid back, with what appeared to be hotel guests returning from a big day of sightseeing and all after a comforting meal. The majority of the clientele appears asian, and the menu has a fairly large selection of asian dishes as well as western ones. Interestingly both menus are titled “ Comfort menus “ and feature our favourite version of Asian comfort food: Nasi Goreng for Mr T and Black pepper beef Short ribs for me. It is a far cry from the sophisticated food of Altitude’s fine dining menu, but just what we felt like before retiring under the bed’s big soft doonas and enjoying a blissful night’s sleep. 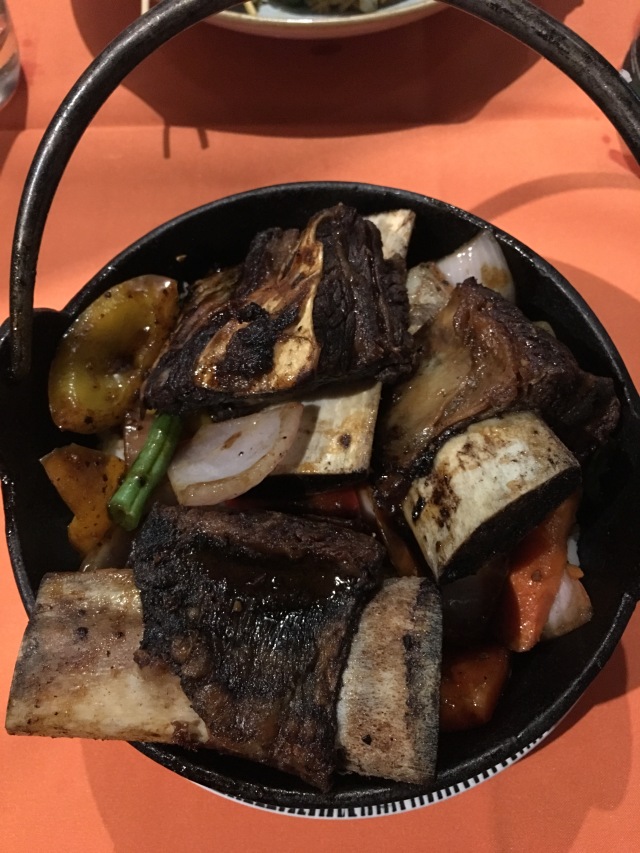 Cafe Mix is also where the buffet breakfast is served, and what difference a weekday make! The place was busy with a mix of corporates and tourists, our table was squeezed between a guy in a dark suit, sipping his coffee while pouring over the Financial Review and an older couple, meticulously dressed for a day on the golf course ( or a cruise ship, I am not sure) The lady glanced over at the yoghurt parfaits I just picked up and asked in a drawling american accent “ these looks delicious, where did ya find them?”

I sent a photo of the pastry section to Anne who was no doubt fixing herself something quick at home before catching the school bus and her reply was “ I want some!” 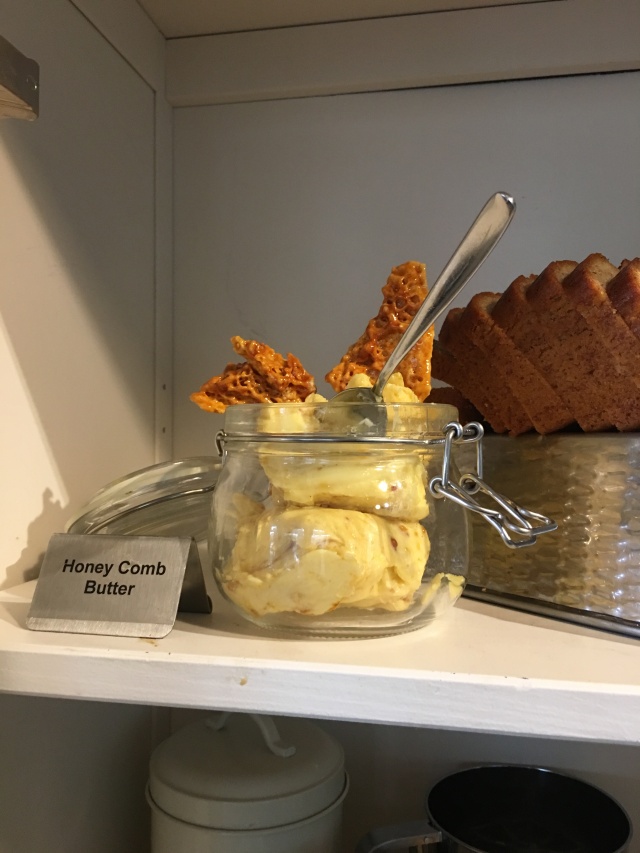 We all love a good buffet breakfast and the Shangri-La’s is pretty good: beside the usual selection of fruits and cereals, there are salads, cold meats, smoked seafood, baked goods to die for…and that’s just for the continental option. Should you wish to order the fully cooked option, you will be offered items like bacon, sausages, eggs, as well as eastern dishes like congee, miso soups,…Maybe next time. 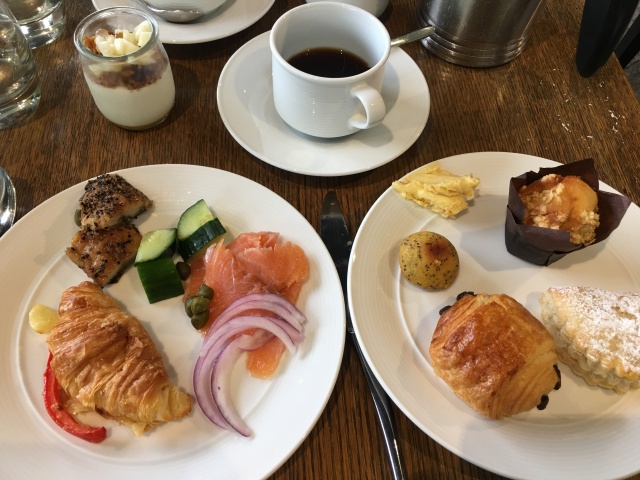 I am glad we were granted a late check-out, so we could not only enjoy breakfast at a leisurely pace but also make good use of the hotel’s facilities. I initially planned on a spa session, but was told it was really busy and first available booking was for the next day! Lucky the swimming pool was not busy ( a rarity I was told ) so I indulged in a few laps instead, trying to wear off all the food from the weekend.

And just like that, it was time to head home, staycation over…thankfully recharged for the busy month ahead.

Since I started to write this post a couple of weeks ago, the festive season kicked in full swing and as always, this is the opportunity to reflect on the year nearly gone and thank you all for following me and reading my ramblings about everything and anything food and travel related. It always warms my heart to know that someone somewhere is finding it worthwhile and (hopefully) enjoyable to share my little corner of the globe. So again, thank you.

From our family to yours, Wishing you all a very Merry Christmas and a Joyful and Safe Festive Season. 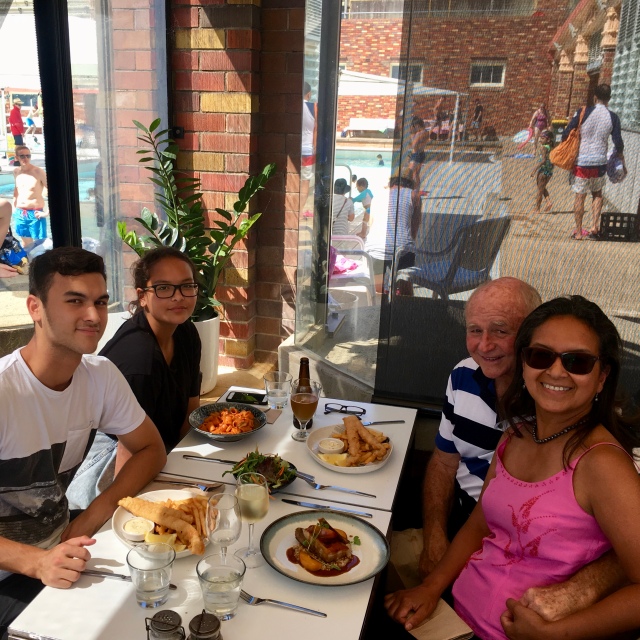 ← Singapore fancy dining with and without kids.
A feast for a King and a few teenagers – Salad and Galette des Rois →

One Comment on “A weekend getaway at the Shangri-La, Sydney”