“Can we have a quiet week, please?” Terry asks me yesterday morning, after the kids have left for school and I am finishing clearing the weekends dishes…
I must say, last week has been crazy busy, a whirlwind of family lunches, birthday dinner, recovery attempts and taste experiments. Not necessarily in that order.

You see, it was Terry’s birthday last wednesday, which happened to be 3 days after (Australian) Father’s Day. We decided to combine the two events and celebrate with a massive Sunday lunch, inviting the family for a chinese style yum cha (yes, we are never short of a theme!). As usual, I spent a few days looking for inspiration on my bookshelves and found it in Chinese Cookery by Ken Hom, an old cookbook I had forgotten I had. From snacks to stews, it was all there, including handwritten notes for some of the recipes I evidently had cooked 20 years ago! I love the odd trip down memory lane, don’t you…

I had my heart set on sesame prawn toasts, a bit old fashioned but no yum cha is complete without it. Dumplings were high on the list too, though I didn’t fancy all the work involved with the pleating. Then after reading about the quest for balance in a chinese menu, ensuring there was a yin for every yang, the list grew and grew to include contrasting ingredients and cooking techniques: lotus root chips and prawns crackers (deep fried snacks), marbled eggs and broccoli salad (cold and healthy-ish, kind of like a palate cleanser), prawn toasts and steamed pork ribs ( more deep fried and fatty bits), wonton soup (the only soup dish in the entire meal) and potstickers, marinated chicken wings ( for the kids!), a chinese style beef and radish stew accompanied by boiled rice ( ok, we didn’t really need this but no banquet is complete without a one-pot dish).

So, what about dessert? A fruit platter of oranges and pineapple would have sufficed, but I know from experience that fruits do not dessert make so I substituted with a mixed platter of fortune cookies, snow rice biscuits and mango coconut jelly pods. Still, I remembered how you can’t mention a birthday celebration to little kids without offering a cake and candles to blow, even if the birthday boy happens to be in his prime (believe me, we had a cake-less dinner once, and the look on the kids face when, after refusing to eat much of the main meal saving themselves for the cake, they realised the best they could hope for was ice cream…awkward, to put it mildly!). So I rushed to the local patisserie and bought this gooey, rich chocolate mud cake. Not a very chinese finish, but a celebratory one nonetheless.

Steamed pork spare ribs, these are actually left overs I quickly pan fried the next day

Once I decided on the menu, the fun started with a couple of trips to Hurstville, a suburb not far from home, host of a large asian community. Anything exotic can be found in the dozens of chinese supermarkets, butchers seem to carry cuts of meat impossible to find in the shire ( think calve’s liver or veal shoulder), and the seafood choices are endless. Though I had made a list of items to shop for, I admit being completely overwhelmed on my first trip and coming home with vegetables and spices only. Ok, I also bought boxes of take-away chinese roast duck, hoisin pork, chili duck giblets salad, chili anchovies, marinated bean sprouts…so intrigued was I by what was on offer. Some of the stalls had such long queues of customers, I just joined in, figuring they must have known something I didn’t. It took another trip to work my way thru the various dumplings, noodles and sauces; and after our first dinner of take aways I was instructed to bring back more duck!
Needless to say that by the weekend, we had eaten our fair share of Chinese food already.

“How are you going to serve 12 dishes at once?” asked Terry on the saturday night.
“I’ve got this, darling! Check out my lists and my timeline.” As much as I like to think that I am organised, I’ve learnt over the years that unless 80% of the prep is done BEFORE the guests show up, chances of the meal served on time goes out the window. My problem is that once people arrive, drinks are poured, conversations start, host gets ahem distracted…and food, well, is forgotten for a while. 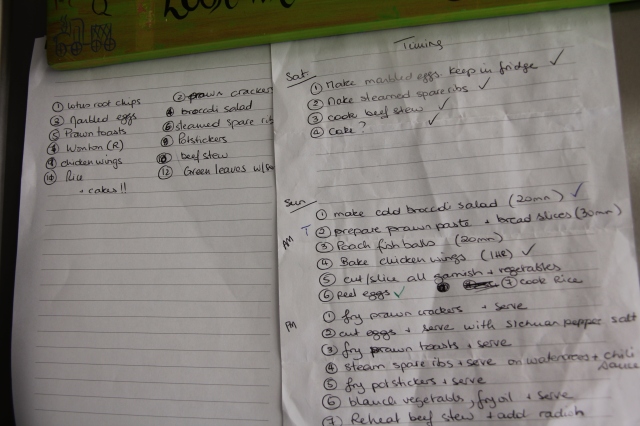 Trying to be organised: I planned on 12 dishes so we would actually serve 10!

So my plan was to produce 2 dishes at a time, with a breather in-between to allow time for cooking. To make it even easier, I had prepared the pork ribs and the beef stew the night before, so they only required re-heating the next day. I cooked the eggs and the broccoli salad in the morning, baked the chicken wings an hour before lunch…so that all that was left to do was deep frying! And just as well, because we all had underestimated how long deep frying for 16 people takes!!!

Our guest were the usual suspects: Terry’s 4 children ( Craig, Mal, Michelle and Tania) and their spouses (Danielle, Kathy and Jai ), the 4 grand-children ( Harry, Hannah, Cooper and Jesse), the boys mother and her husband (Rosalie and Ian) as well as the four of us. I assigned Marc with the taking of photographs, a task I am normally in charge of, when I don’t have to spend so much time in the kitchen. He started off well, until dish number 5, when he was offered a beer and asked to join the men’s conversation. That’s when the camera was retired in a corner, only to be found again just in time for the cake*.
Anne took charge of the deep frying and while she handled all these lotus roots and prawn crackers brilliantly, we nibbled on the bakkwa ( asian jerky) that Shelley and Jai had brought over. 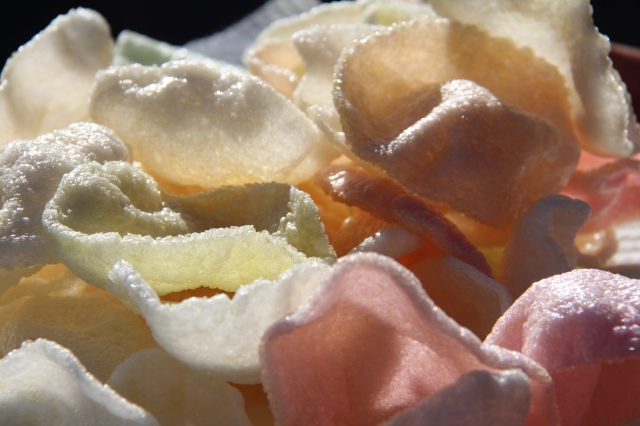 As Tania had read my mind, and made the mixture for prawn sesame toasts, I decided to turn up another prawn dish, deep fried on a bed of lettuce. The prawns were a hit, as well as the steamed spare ribs we served along side. 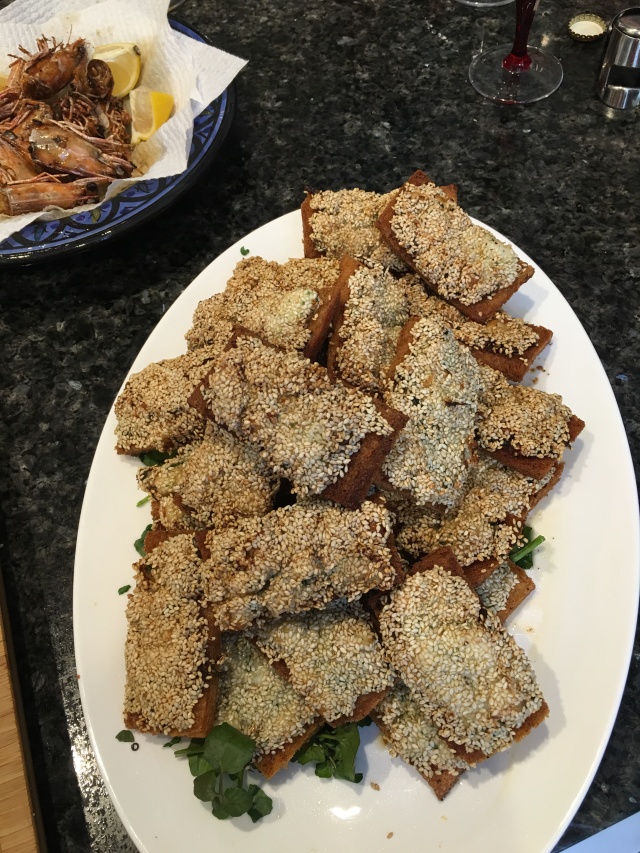 Not the prettiest sesame prawn toasts but certainly the yummiest. In the corner, you can just see deep fried prawn heads, my favourite!!

Then, it was show time for Rosalie, who kindly offered to take care of the wontons, since I declared them too fiddly to make. There is nothing like a guest coming over with their own chicken stock, tray of home made dumplings and sauces, AND the cute little bowls to serve the individual wontons in!
By the time the chicken wings and the beef stew appeared, most of us could only handle a mouthful of everything.I had planned a plate of chinese green leaves with soya sauce, so we could say we had vegetables, but these got forgotten about and by the time I remembered them, the little ones were asking me when the cake would be served.So they stayed in the fridge, for use later in the week ( that’s another story in itself!)
Which brings me to the end of the meal, with the customary fortune cookies, mango coconut jelly cups and snow biscuits the grand-children had saved room for. And of course the chocolate mud cake! 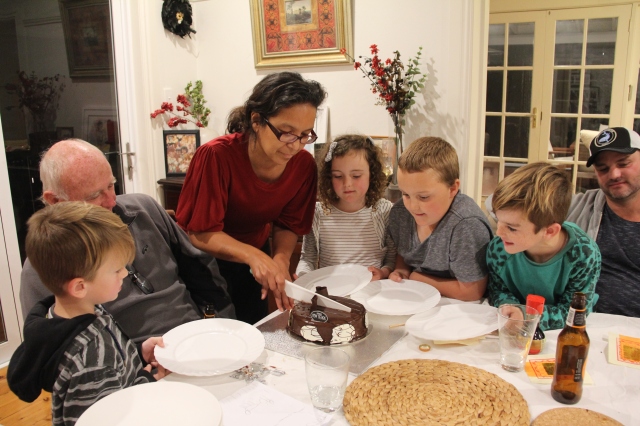 I always love the way the kids gather closely for the first slice of cake!

Needless to say that we all left the table full…and as our guests made their way home, I packed away enough left overs to last us for a whole week.

*This explains why some of the dishes photographed are in a different light, as we didn’t get a chance to do it during the lunch, we plated whatever left overs we had the next day for photos!

This vegetable dish is perfect for a buffet or a picnic, as it can be prepared in advance and kept in the fridge until ready to serve. It is a delicious way to serve broccoli other than steamed! 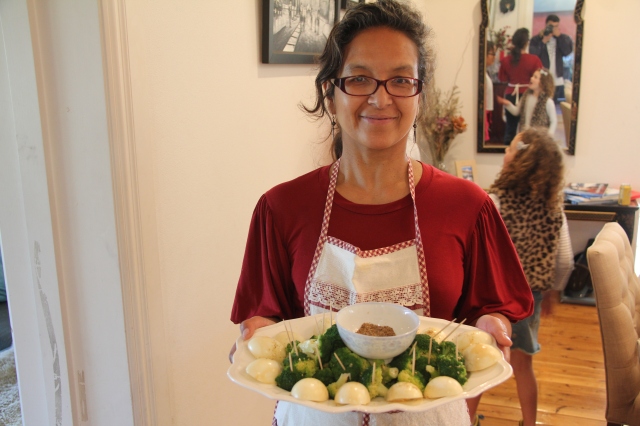 Serves 6 as a side dish

This meat dish has a very unusual flavour, with a combination of sweet spices and fermented yellow bean sauce. It smells quite strong but tastes surprisingly mellow. The original recipe uses beef brisket but I prefer to use chuck steak instead, as it is more tender and flavourful. It can be cooked in advance, cooled and kept in the fridge. Re-heat slowly before serving.