How to make the most of a whole shoulder of lamb?

It is Easter week and I have been busy baking sweets in anticipation of a Good Friday gathering ( I am in charge of desserts). Craving for anything savoury and looking for inspiration for a lamb dinner, I came across this post, pre-blog, which brought me back to our Mexican days and some of our best culinary adventures. Here is a story from the vault!

This is the week before Easter, and I am on a mission to find lamb for Easter Sunday.

It’s been a while since we’ve had lamb. It was far too expensive in the US (like $30 per pound !) and when I found that we could buy a quarter of a lamb, namely the shoulder side, in Mexico for 100 pesos a kilo (that’s just over $8), I had to buy it. Admittedly, it was frozen, imported from the USA ( I like to think it was Colorado lamb, a delicacy in the US, but it may have been from some cheap place for all I know!); so my 4.5 kilos piece had to sit in the fridge for 3 days, thawing out enough to handle. And the flip side of buying cheap is, that getting the cuts of meat was a DIY job. Terry suggested I chop around the bones and cube the meat to make curries. But I had just finished reading Meat: A Kitchen Education from James Peterson (one of my new specialty books acquired in New York), and guess what? There was a whole page dedicated to boning a shoulder of lamb, so I could not resist the challenge, and set off to sharpen my usually blunt butcher’s knife. It was not as easy as the pictures showed, I can tell you, especially when the meat is still freezing cold and the bones refuse to come off. Imagine the scene when my neighbour walked in, and saw me butchering (literally) this bloody lump, wondering what would come out of it (we had been cooking papaw chutney earlier on, the contrast could not be greater!) Terry started to worry that I might lose a finger in the process, so took over and did a very neat job of separating the ribs and spinal bones, dicing half of the meat, and leaving the rest in one piece for roasting. 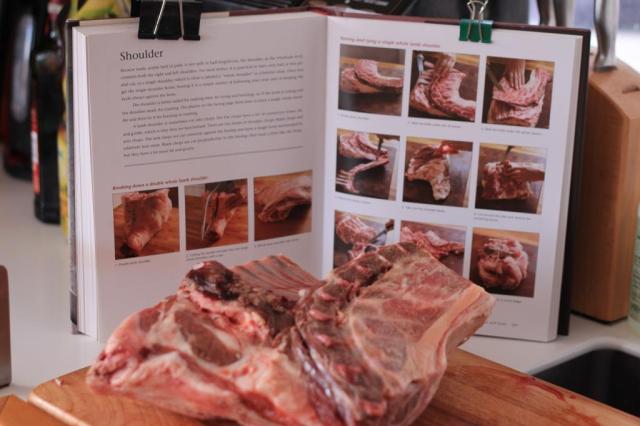 We turned 4 meals out of it all: the diced meat made into a delicious lamb colombo, 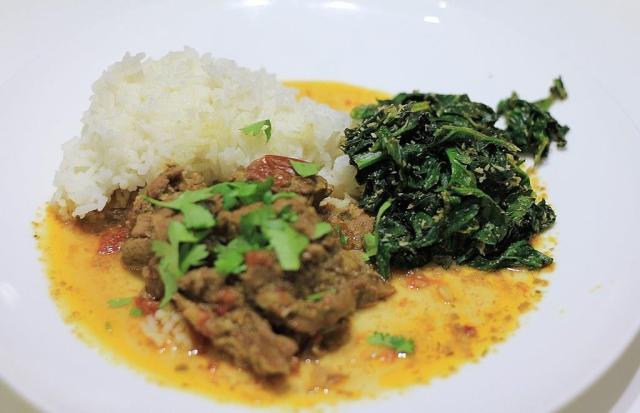 I braised the roast and served it with roasted beetroots and mushrooms. 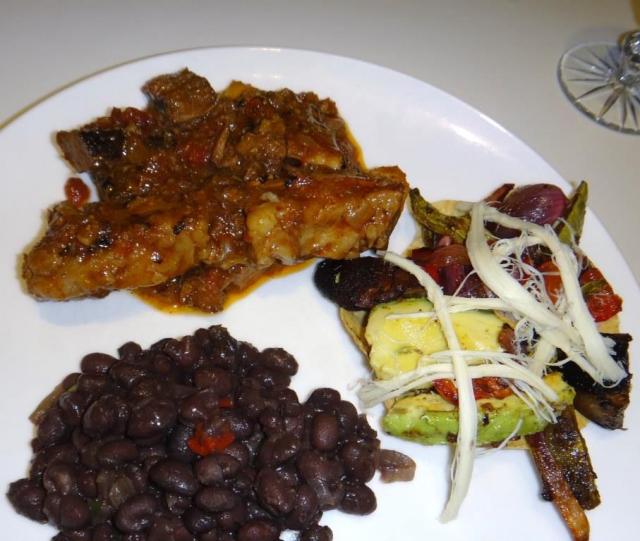 The bones were thrown in the pot with a fat carrot, onion and some celery, and let to simmer for 3 hours or so, making a wonderfully flavoured stock, which was intended to make a soup but ended up used in the braise. 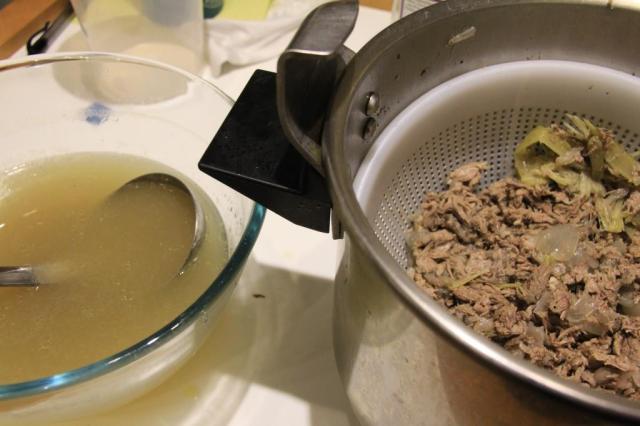 Lamb broth and boiled meat, before frying up!

The last dish was improvised after straining the stock and noticing how much meat had fallen off the bones. Not wanting to waste this perfectly boiled meat, I decided to mix it with some finely chopped red onion, loads of garlic, fry the lot in a good glug of olive oil ( Terry much prefers the smell of fried lamb rather than boiled!), add some canned tomatoes, tomato paste, a healthy pinch of Italian herbes, and voila: lamb pasta sauce to go with the left over macaroni from last night! How easy was that?

As I write, the aroma of lamb and rosemary is still floating in the galley and our son has just polished the left-over roast. What remains of the curry and the stock are sitting in the freezer, waiting for an encore. I believe this week end’s exercise took care of our lamb craving for a while, we now can turn our attention to another Easter favourite: Chocolate!

Colombo spice mix is similar to curry powder, used mostly in the Caribbeans. In fact, its roots go back to Colombo, the capital of Sri Lanka, hence the name. Colombo powder is  widely available in the West Indies, but since the ingredients used are pretty much the same as in Garam Masala or Curry Powder, it is very easy to make your own mix. The flavour will vary depending on the proportion of spices included. I cooked this dish in a pressure cooker, it cut the cooking time to 1/3. If using a traditional pot ( like a dutch oven, Le Creuset style), increase the cooking time to 3 hours.

3 tomatoes, seeded and chopped (no need to peel)

← In love with tomatoes
Easy meal for moving days →

One Comment on “How to make the most of a whole shoulder of lamb?”