My parents must have thought the same, as growing up as a child, I can’t recall it ever being served at home. Not even the school canteen would offer it for lunch.

It would take me moving to Australia to experience my first cephalopod. It was a squid, also referred to as calamari, the octopus smaller cousin. Easier to cook and more tender, my first taste of it was as a heaped plate of deep fried calamari rings. It was love at first bite, and I have since sampled quite a few of these. Variations have included salt and pepper squids, marinated and barbecued squids, squids in salads…At some point, baby octopus was introduced to my plate ( probably sharing the same grilled fate as its calamari friend ) and became another regular on the seafood menu though I always preferred to order it in restaurants rather than cook it myself.

It wasn’t until well into our cruising days that I was “gifted” a freshly caught octopus and faced with the challenge of cooking it from scratch. We were laying at anchor in a small atoll in the Tuamotus, French Polynesia and we were supposed to go lobster hunting with the local fisherman. Bad weather conditions precluded us from doing so, and he kindly offered us an octopus instead that he’d just speared off the beach. That’s when I learnt to cook octopus.

Fast forward to today, and the bag of baby octopus I purchased from my favourite seafood supplier, Mrs Fish Shire, at the Sutherland Shire Market. I had plans to marinate them and grill them as part of our Father’s Day barbecue. However, a generous supply of oysters followed by steaks and dessert meant that the octopus stayed in the fridge, forgotten until our guests were gone.

What to do with 1 kg of baby octopus? First, I boiled them until tender. Then I used half of them for a salad, using this recipe. This is a favourite in our household and generally disappears very quickly.

For the remaining half, I found inspiration from our Spanish travels and a packet of chorizos in the fridge so cooked a hybrid version of paella and seafood stew. More comforting and exotic dish, I can’t think of when it is cold and windy outside and your mind is wandering back to sunnier and carefree days in the Med. 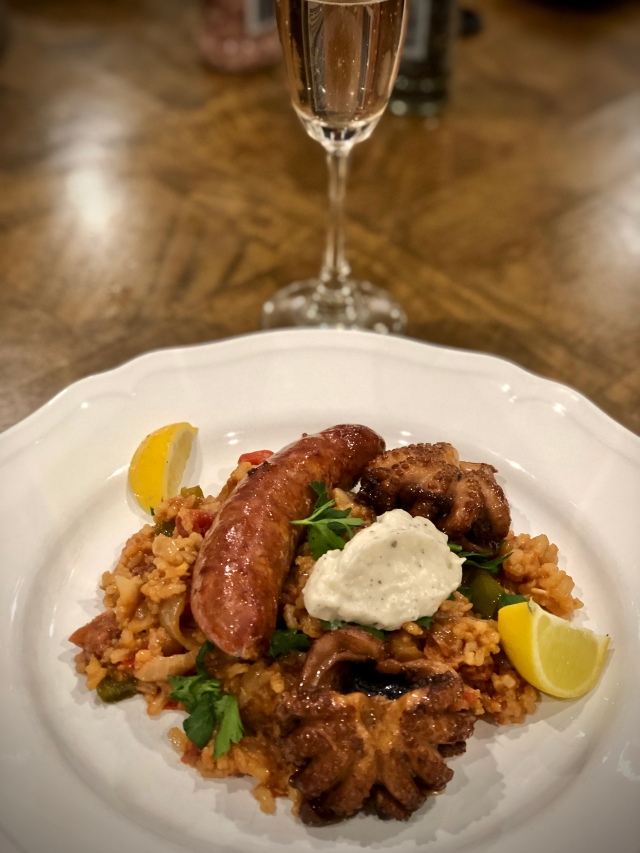 4 tbsp olive oil
3 onions, peeled and diced
5 garlic cloves, peeled and crushed
4 coriander stalks ( keep the leaves for garnish )
zest and juice of 1 lemon
1 can ( 440g) crushed tomatoes in their juice
1 green capsicum, trimmed and diced
1/2 red capsicum. trimmed and diced
1 1/4 cup of calrose or medium grain rice ( the type you use for paella )
700ml seafood stock or water ( I used the water I boiled the octopus in )
500g pre-boiled baby octopus ( if using a large one, cut in 2.5cm slices )
6 chorizo sausages ( 1 for the pot, 5 to grill separately )
Garlic cream ( optional )
Parsley and lemon slices for garnish 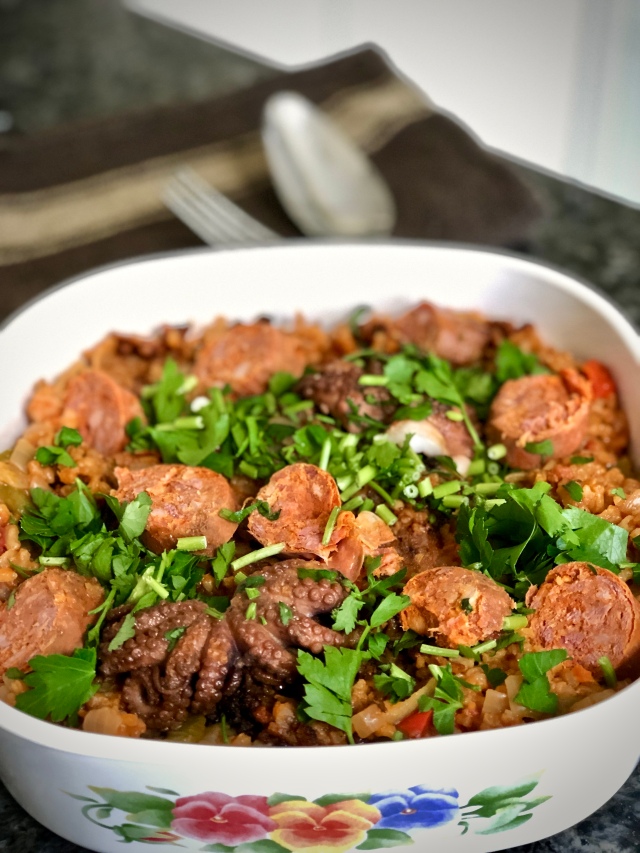 ← Whales, sand dunes, and fighter jets – a winter break in Port Stephens
Chilling out in Bangkok →