A few weeks ago I caught up with a cruising friend, Magali, who recently relocated to Sydney after years spent overseas (sounds familiar?). Beside a love of the sea and both hailing from Europe, we share a passion for food and cooking and think nothing of discussing a particular dish for hours or planning lunches anywhere in Sydney. She is also a new mum with a 4 months old baby, which means she has not had much time to cook as extensively as she used to. As a person who feels out of sort if I don’t make at least one thing from scratch everyday, I can only imagine the frustration. Since we live in opposite sides of Sydney I can’t really cook for her or offer to baby sit. What I have been able to do though is share some of our family’s favourite food, granola. Technically, it is breakfast food, but it is so delicious and nutritious, I can’t see any reason why not have it for lunch and/or dinner. Especially when you are so busy or tired (or both) that you could not be bothered to do more than grab a bowl, fill it with some crunchy goodness and pour some milk/yoghurt.

For years I have used the same recipe, though it has become more of a template allowing for variations depending on produce availability or tastes. For example, I no longer use butter, preferring a small amount of oil instead (it stays crunchy for longer, not that it matters so much in our house as the whole jar can disappear in 3 day!) I have increased the amount of vanilla extract and spices for extra flavour. Also, now that I have a better oven (i.e one that won’t cook unevenly and require constant turning of the food) I have done away with the pre-heating, reduced the temperature and increased the baking time which makes for a toastier, crispier, not-a-single-bit-burnt granola! You will note that this version is still very nutty, I don’t include dried fruits in it. Though I like the idea of speckles of dried cranberries or sultanas shining thru, no one in our family likes the taste or the extra sugar, preferring to add fresh pieces like chunks of mango, pear slices or blueberries. But to each its own.

So, here is my latest version. It has proven popular all year round not only in our house but also with the friends who tasted it. In fact, since this is the time for giving, I think Granola may become our signature edible gift for 2016! 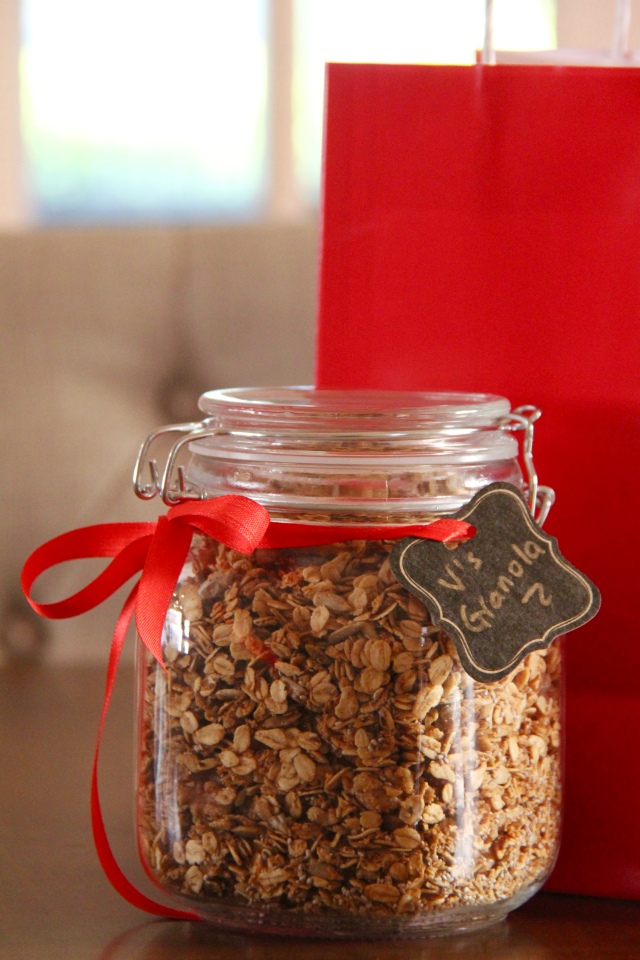