Memories of and American Cookout: Burgers and Ice Cream Cake 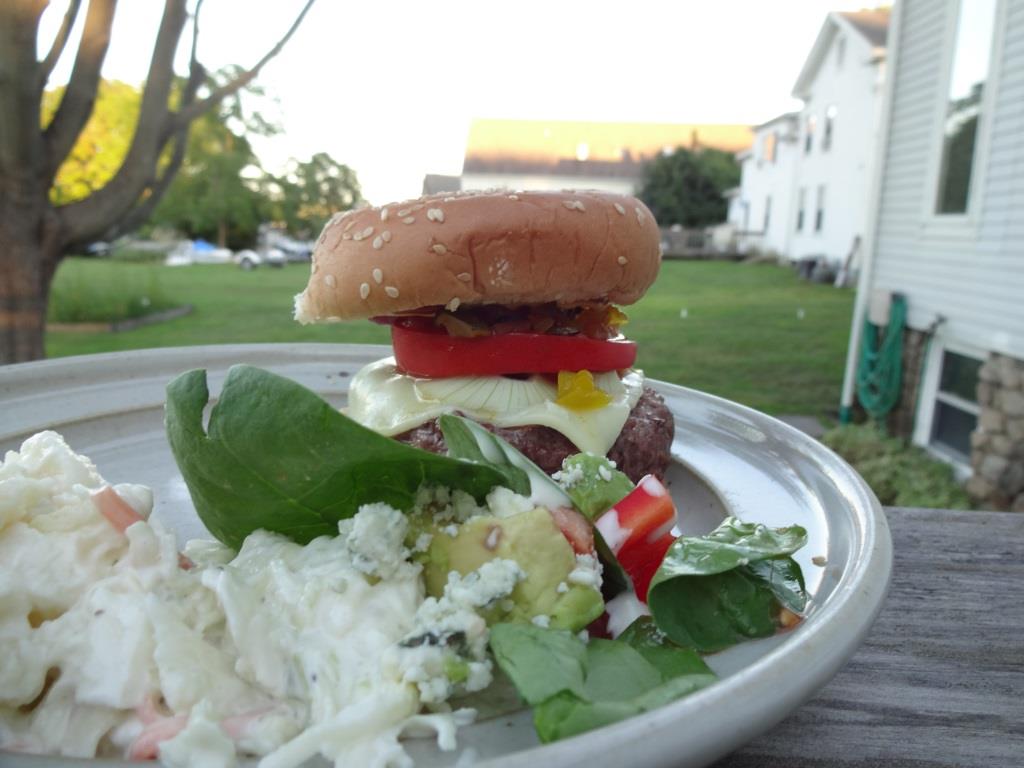 July in Sydney: sunny and cold. Chilled to the bone, I am going over the thousands of photos taken during our last cruise and back in time when we spent the summer of 2012 sailing along the US East Coast.

I’ve said it before, the great thing about cruising is the opportunity to meet local people other than thru tourist eyes. Once we anchor or tie up at a marina, the first job is generally to locate the markets, banks, hardware stores and good restaurants…not necessarily in that order. In the process, unlikely circumstances have led to incredible encounters and even better eating/cooking experiences. From a 4th July cookout at the Washington DC Capital Yacht Club 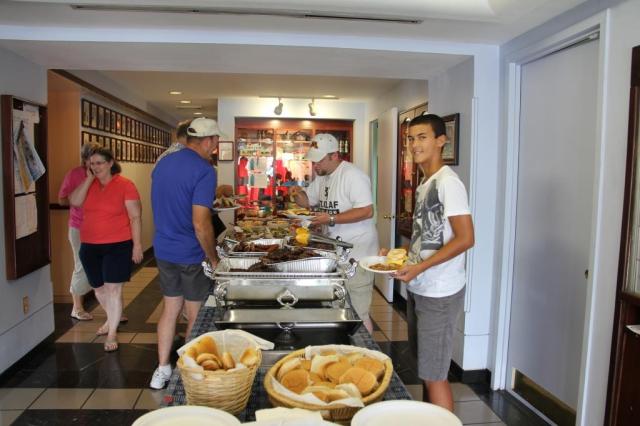 to a Labor Day picnic in NYC Central Park,

our American journey is full of fantastic memories. One particular one is meeting a delightful old couple in Noank, CT, Mr and Mrs Farrington, keen sailors and prominent members of the local community. We didn’t meet by chance, their son David, works for Lagoon and we have been in regular contact for years. As it happened, we needed a boat part delivered, and when David heard that we were stopping by near his folks, he arranged for us to collect it from them. Not only were Don and Rose Farrington nice enough to hold on to our stuff for weeks, but they welcomed us into their home twice and offered to become our mailbox  for the whole duration of our cruise around New England and beyond (it may not mean much to land lubbers, but cruisers will understand the convenience of having a reliable and trustworthy contact on foreign shores…)

On our return leg from Newport, RI, we stopped by Noank one last time and were treated to the Farrington’s hospitality again with a phenomenal American Cookout: hamburgers, hot dogs, potato salad, corn on the cob…kids running around the frontyard, amidst rows of sunflowers, zucchinis and corn while the rest of us supervised Don who was in charge of the green egg ( only in America have I seen a BBQ like this!) As the sun went down and night set in, we all lingered on, not wanting to go home. The feeling is always the same, when you make good friends and you know this is the last time you’ll see each other… 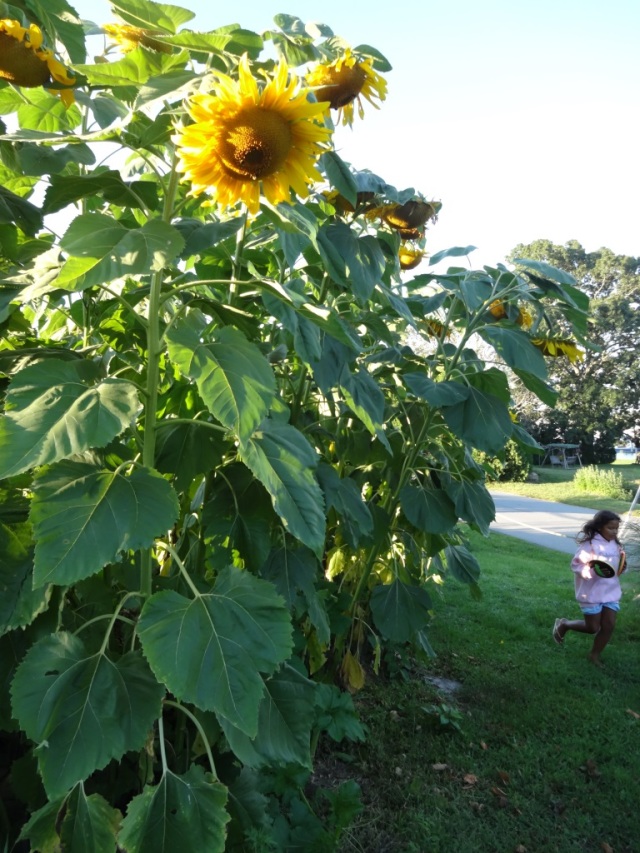 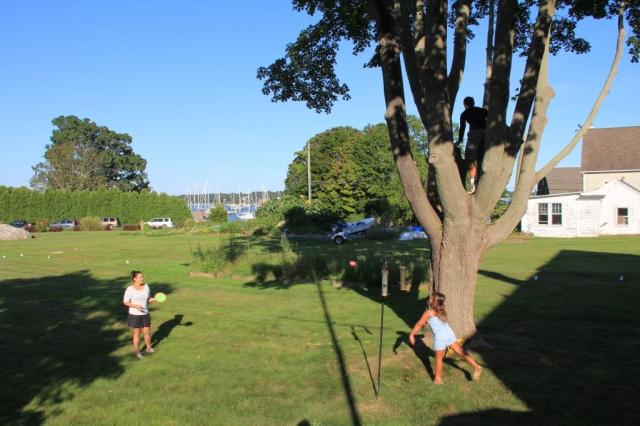 Some of Rose’s massive squash from her garden

The dynamic duo! i can’t tell who is in charge here….

Rose asked the kids to clean up the freshly picked up corn. They obliged heartily! 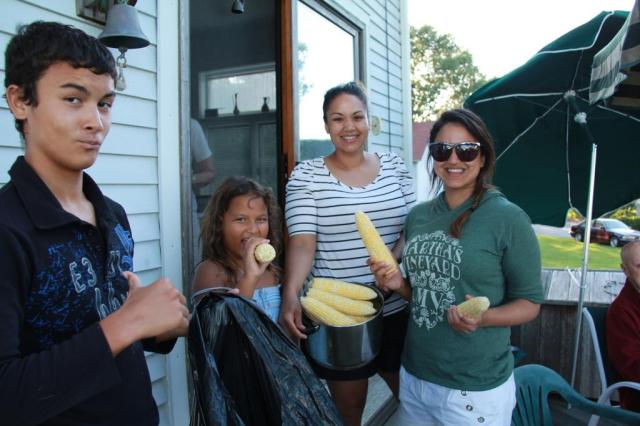 Even the neighbours joined in at the end of the night…

I love how these people took interest in our lives, particularly our young ones…Inspiring us to be as compassionate and kind as them!

Don passed away 12 months later, and I recently found out Rose followed him within a year. To say I am shattered  is anunderstatement, and not a summer goes past without remembering this gentleman who clicked with Terry over a cold beer and so generously took interest in in our travels. One of Rose’s gift to me was a jar of her home made zucchini relish, long gone, but still remembered as one of the best. I was going to ask her for the recipe, but obviously left it too late….

So, feeling nostalgic and to be honest, in need of a little splurge on the eating department, we decided to have a cookout of our own last weekend, as part of our reward dinners. The setting was not as picturesque as in Noank (it was in our house, heaters blasting and darkness all around!) but we certainly made up with the quantity of food. As per some of our guests’ requests, we kept the menu simple: no snacks, purely burgers! That meant pure beef patties, basic trimmings of sliced onions, tomatoes, lettuce and beetroot (the latter is an Australian thing), and cheddar cheese. Tania brought the buns, and not just plain hamburger buns: tiger buns, ciabatta buns, soft rolls…for the people who didn’t fancy the traditional sweet hamburger buns! I could not help myself and had to prepare a creamy coleslaw, because somehow an American Cookout needs a salad. Not to be outdone, Craig insisted we needed French fries and ran to the take away shop around the corner. 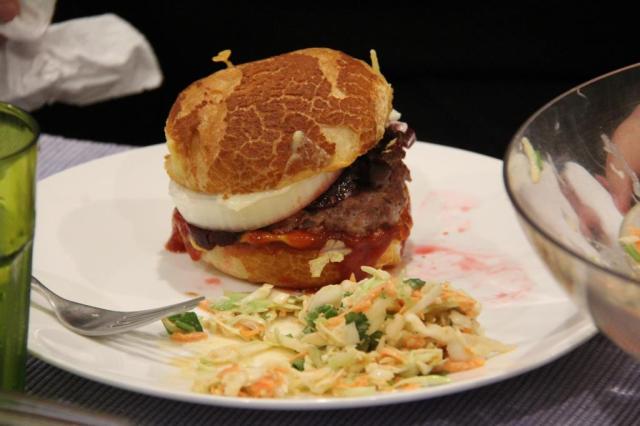 When it came to dessert, I had my heart set on ice cream cake, typical of a summer cookout. Inspired by a flag cake recipe from Smitten Kitchen (love that blog!), I decided to make it as simple as possible with a few bought ingredients: a layer of sponge cake, a layer of vanilla ice cream, rows of blueberries and strawberries to resemble a US flag, in keeping with the American cookout theme…and voila! It was child’s play really, so much so that after a few drinks, we all decided to have fun with the decorating, the sifting of the icing sugar and the alignment of the berries: that probably explains why the rows are not neat, and the kitchen bench ended up under a blanket of sugar… Like I said: child’s play..

I can’t really say this is a recipe, it is rather a method, adapted from many recipes read over the years. My favourite one is from Smitten Kitchen, where Deb actually bakes her own sponge cake and whips her own frosting. The finish product looks stunning and I just wanted to achieve the look without spending so much time in the kitchen. So this is my (much) simplified version of an already simple cake.

One Comment on “Memories of and American Cookout: Burgers and Ice Cream Cake”