Back in July, one of our stop over was in the Vava’u group of islands, part of the Kingdom of Tonga.

Our stay was brief, only 2 weeks, as we had spent longer than planned on French Polynesia (too much of a good time!) and we had guests to meet the following month in Fiji. A rough sea voyage and a spell of bad weather with strong winds, meant that our crew didn’t feel like venturing too far among the islands and preferred to stay safely anchored close to town most of the time. 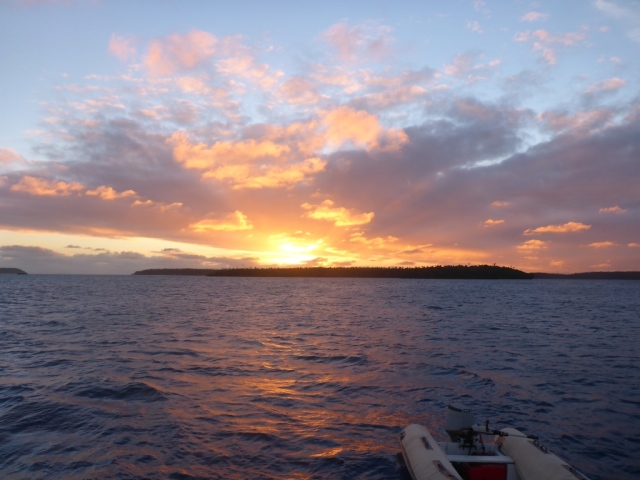 Just like any Polynesian country, Tonga is famous for its gargantuan feasts (known here as Lovo). The most spectacular ones mark special events like the King’s coronation or a chief’s daughter’s wedding, featuring a whole suckling pig for each of the guests. Literally tons of food are piled and spread on long platters for the occasion: taro, yams, cassava, sweet potato, breadfruits, fish, lobster, octopus, chicken, corned beef, cooked taro leaves and fruits. Cooking is done in an underground oven (umu) where each parcel is wrapped in taro leaves, and buried under banana leaves, coconut husks, rocks and soil. Terry and I once attended such a feast. It was during our first visit to Vava’u 15 years ago, and put on for visitors at Hunga, one of the villages. While not as earth shaking as what I described above, I still remember how 20 of us sat cross legged on the ground, in front of leaf mats loaded with roast chickens, breadfruits and green drinking coconuts. Each of us were presented with “mystery-bags” filled with stuffed capsicums, pork slices mixed with vegetables, tender corned beef stewed with onions…all smothered in coconut milk and with a smoked aroma. Dessert was baked papayas with grated coconut and little balls of tapioca flour and coconut cooked in brown sugar caramel ( not unlike the coconut candy I learnt to make in the Tuamotus recently)
The memory of this dinner was so great, that we wanted the kids to experience it as well. A few villages around Vava’u organise “cultural shows” for the sake of the yachties, the one on Lape sland being famous for not only its feast, but also the traditional dancing and the handicraft display. Unfortunately this week’s show was cancelled due to bad weather as was the following show because of the King’s attendance to the Agricultural Show! We could have gone to any of the other island feasts that seem to be on a few nights a week, but since the children did not exactly jump with excitement at the idea, we decided to hold on to our memories and make new ones instead: whale watching, snorkelling, and enjoying beach bonfires fires with friends…cruising life at its best! 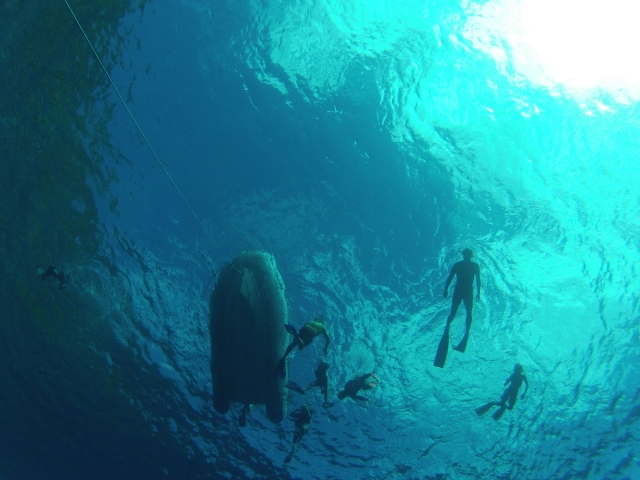 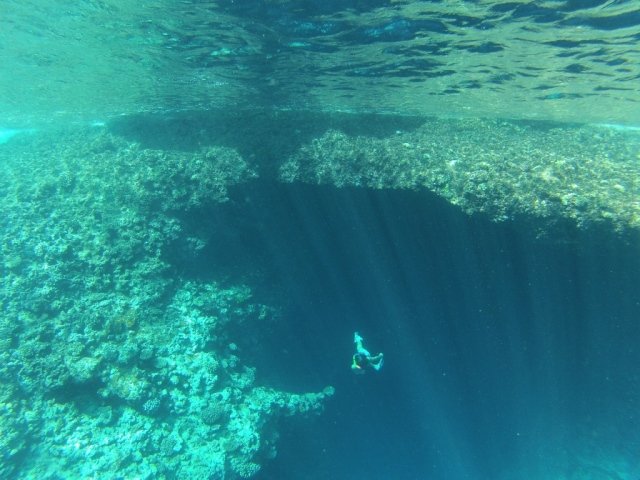 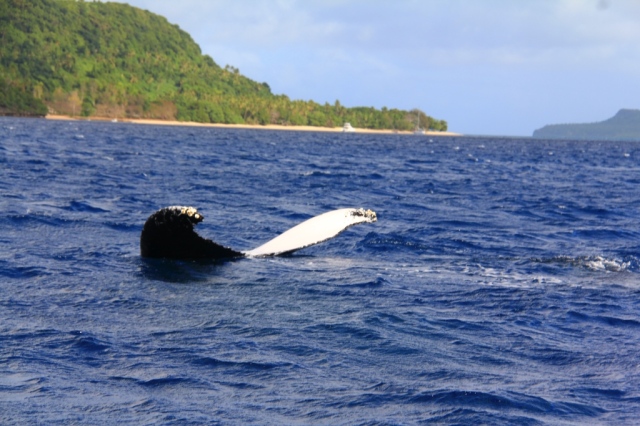 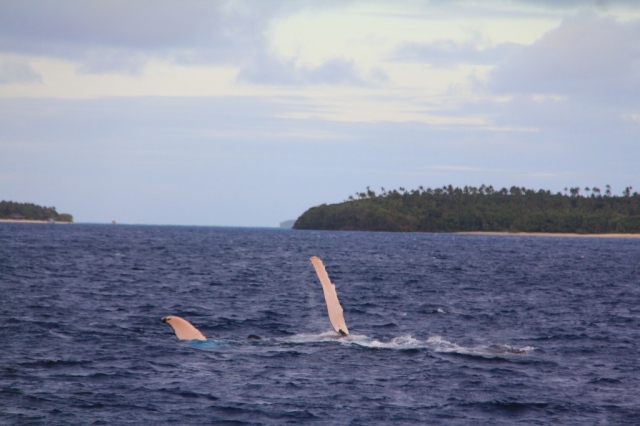 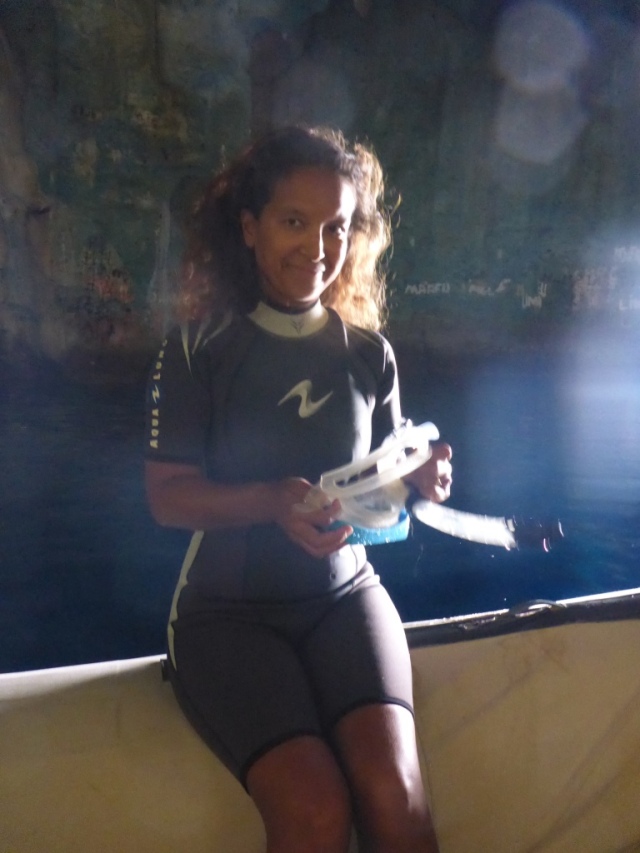 Tonga may be a Polynesian country, but without the French rule there is no mistaking the end of the French influence. After Papeete and Bora Bora, the cost of living here is cheap.
The ‘Utukalongalu farmer’s market is busy with fruits and vegetable, some local (bananas, pineapple, green peppers, cabbage, bok choy, coconuts, green beans, pumpkins, manioc, onions, tomatoes, papayas, taro, yams, cucumbers and watermelons), some imported “direct from the weekly ship” (carrots, apples, pears, zucchinis, potatoes and oranges) Everything costs T$3 a bunch no matter the size ( could be 3 tomatoes or a 5kg pumpkin)! As any island market, to be assured of a fair selection one has to arrive early, which is not easy in my case. Instead I opted to visit the market daily, not because we needed food that often, but because each visit yielded its own surprise in newly discovered produce. On Monday, looking for coriander, I stumbled upon big and healthy bunches of dill. A herb I normally associate with northern climates (think Sweden or France) I was assured it was grown locally, in the tropical gardens of Vava’u! On Tuesday, one of the ladies sitting on the pavement outside the market hall, introduced me to the ai nut: a hard green outer shell which needs cracking and reveals a thin pale green kernel tasting very much like a green almond (Marc and I became addicted, and would go back to the market each morning for a new bag!) On Wednesday, I had another surprise, this time in the shape of a herb I had last seen in Mexico and called Cuban oregano. The Tongans call it plain oregano, even though the thicker and wider leaves smell more like sage. By now, you’re probably wondering why all the excitement. Well, for me, the discovery of familiar food grown in unfamiliar environments means infinite cooking possibilities. The same way I paired dill and freshly caught wahoo with a creamy sauce, I married Cuban oregano and chicken in a revamped apple sauce. 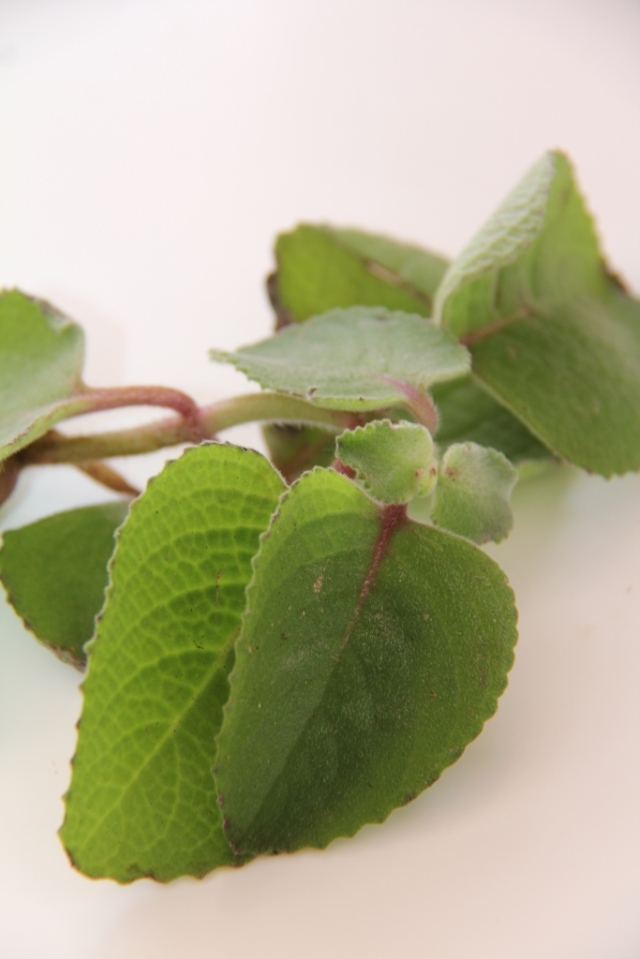 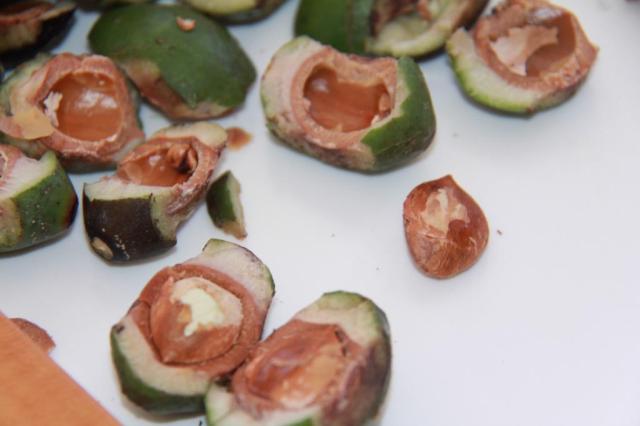 Ai nut from Tonga. The kernel is the only edible part, not unlike a green almond. 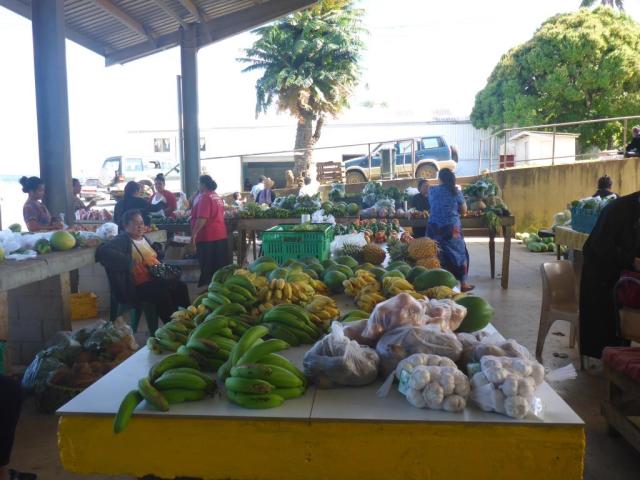 That is for the fresh food and the only good news. There is no supermarket in Neiafu, but there are lots of medium sized grocery stores carrying NZ and Aussies foodstuff, some limited American products too. Whatever you can’t find in one, you may find at another’s… All meat and chicken is sold frozen, the condition of the packages depending on how many power shortages the shops had to endure. Looking at the cows and pigs allowed to roam freely around the streets of Neiafu, you would think there would be a butcher selling fresh meat. Except we were told fresh pigs and beef are only available for feasts. And sadly, no baguettes or French cheese!

Having said that, a dozen cafes abound around town, some like the TROPICANA sell take away bread and pastries (not as good as what you can bake yourself I’m afraid), others like ROOSTER BISTRO offer yacht provisioning, but I have not checked that yet. Some enterprising locals will row to your boat and offer fresh bread, even lobsters. I bought 6 good sized ones from a guy called Alofi for T$125 (and I think he overcharged us when he saw our boat!). And since, we still have lockers full of food from Panama and French Polynesia, there is hardly anything to complain about is there? 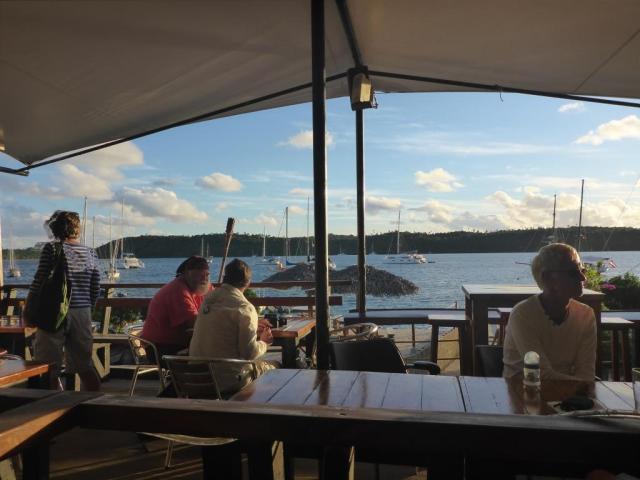 Our office for a week: the deck of Aquarium Cafe overlooking the harbour 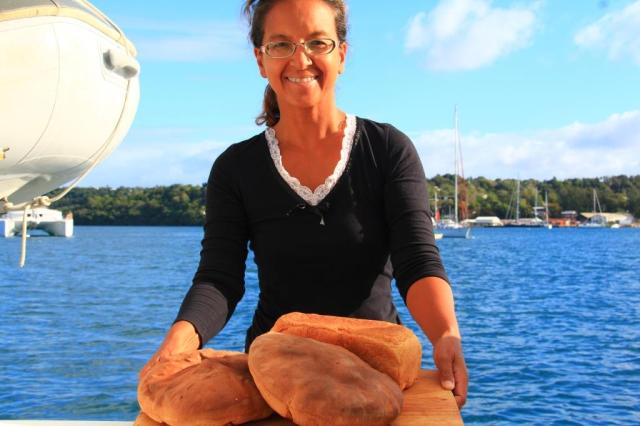 Early morning bread delivery, by the same guy who delivers the lobsters!

Considering the amount of food onboard, we have been eating out a lot while in Neiafu. There is an amazing number of cafes and restaurants for such a small town, all catering for the aussie and kiwi crews. While I miss the French food, Terry and the kids loved being back in the land of burgers, fish&chips, pizzas and meat pies offered by the likes of BELLA VISTA CAFÉ, TROPICANA and AQUARIUM CAFE. The food is good and pretty much what you’d find on an Australian menu but prices are on the high side for what you get though: T$35 for a main course of fish & rice, T$45 for steak & chips, T$26 for pizza or a burger, …beer is T$7. The worst I’ve had is a take away sausage roll for T$7 and it was inedible! Still, we do go out because we need internet and the only way to connect is in these cafes where some offer free WIFI and others charge even if you eat there…( We have tried to pick up signals from the boat, but the passwords are changed daily to prevent people logging in for free) Our favourite hangout was no doubt the AQUARIUM café, where not only did we enjoy Mike and his staff’s hospitality but also the best pizzas in Vava’u. 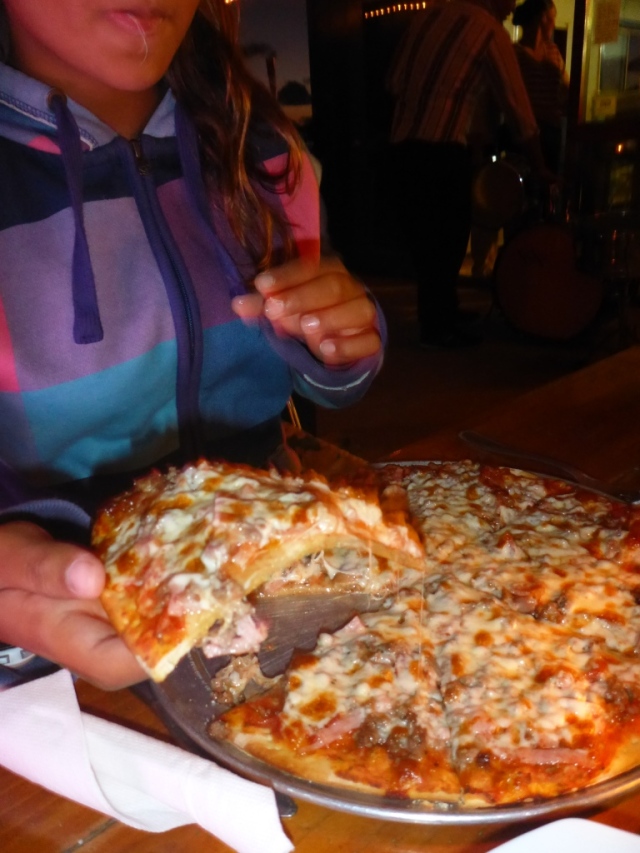 Pizza haven at the Aquarium Cafe 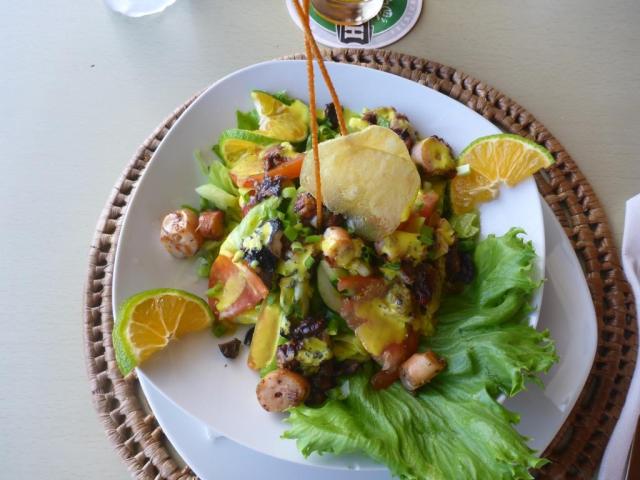 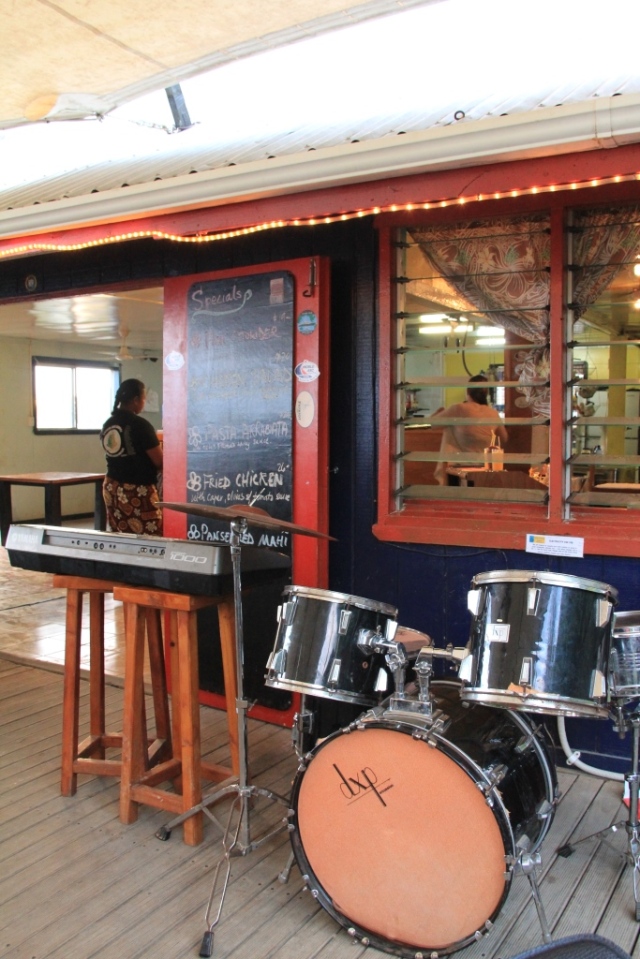 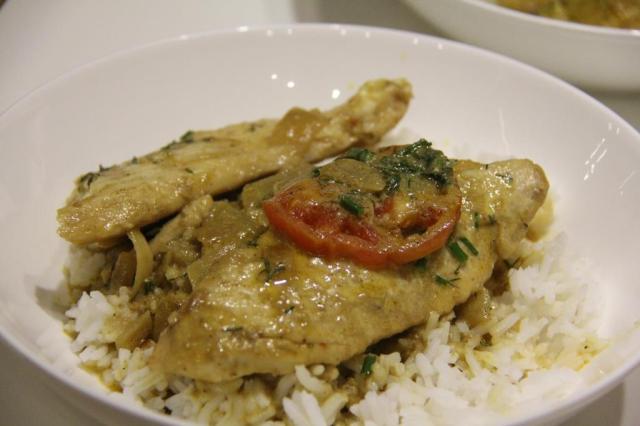 1. In a large skillet, heat the butter and the olive oil over high heat. Pan fry the wahoo fillets , 2 minutes on each side, until the fish is slightly opaque. Remove from the skillet and keep warm.
2. In the same skillet the fish was cooked, add the onion slices and cook over medium heat until soft and translucent. Add the dill, the white wine and let it reduce by 1/3 . Once reduced, add the cream, warm up without bringing up to the boil (watch it!) and turn the heat off. Season to taste.
3. Serve the fish on a bed of rice, garnish with a slice of tomato and spoon sauce generously on top.
4. Enjoy! 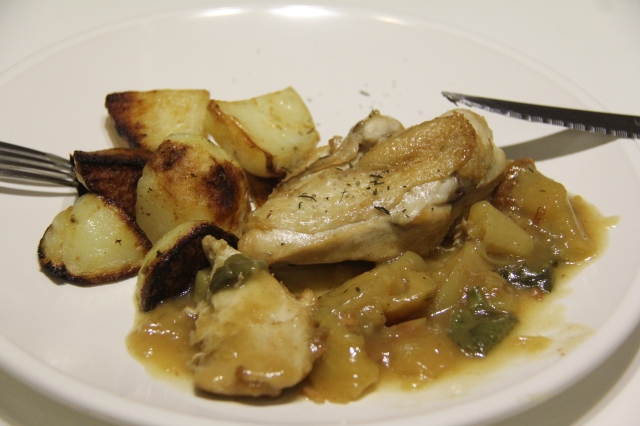 Ingredients
1 chicken cut into 8 pieces, or 4 chicken marylands
1 tbsp dried thyme
2 apples , peeld and chopped very roughly
2 tbsp butter + 2 tbsp olive oil
1 onion, peeled and chopped finely
2 tbsp Cuban oregano, chopped roughly
½ cup white wine
1. Season the chicken pieces with salt and pepper, sprinkle the thyme all over. In a large skillet, brown the chicken in the butter and olive oil until golden.
2. Pre-heat oven to 200C. In a large baking dish, place the chopped onion, apple chunks, and Cuban oregano. Transfer the chicken pieces to the baking dish, along with any juice from the skillet where the chicken was browned in, making sure that the pieces cover the vegetables. Bake for 45 minutes or until the juices from the chicken run clear. The chicken should be golden brown and the apples should be soft , having been stewed in chicken juice.
3. Remove the chicken pieces and keep warm. In the meantime, transfer the apple/onion mixture to a saucepan, add white wine and bring to the boil. Simmer for a few minutes until the alcohol evaporates and the sauce is glossy but still chunky. Season to taste.
4. Place chicken pieces on a plate with the sauce on the side. Serve with roasted potatoes.
5. Enjoy!