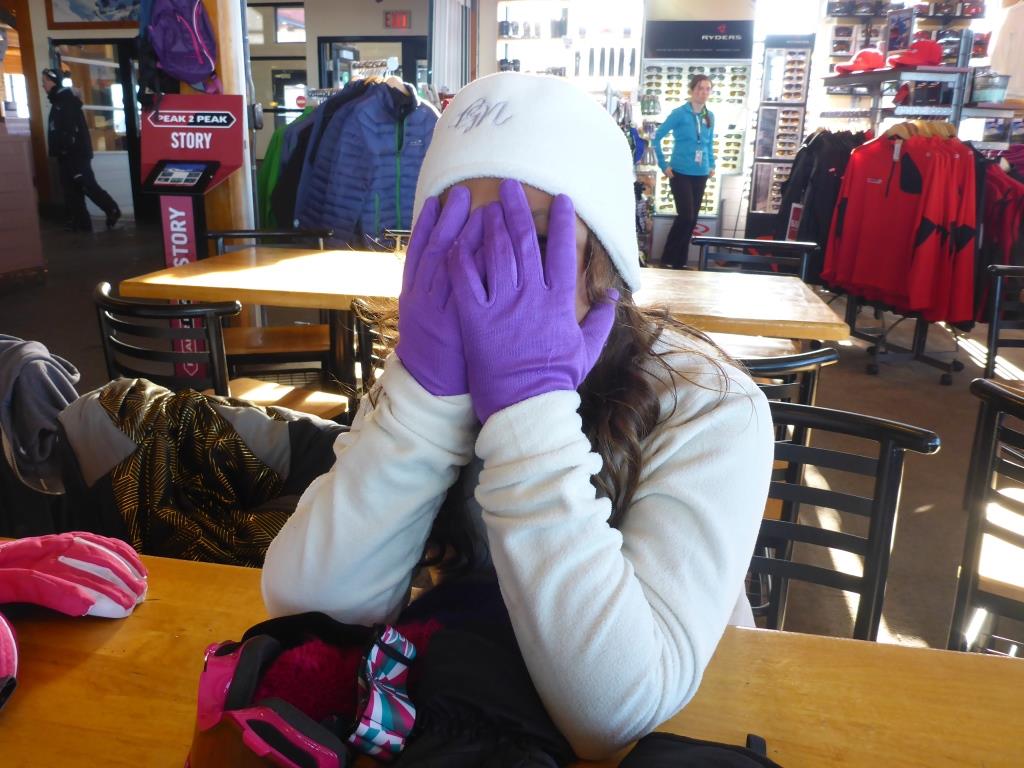 This blog was initially designed to talk about what we cook and eat on the boat while cruising the world. But since we’ve been tied to a Mexican dock for a year or so, the stories seem to have revolved around whatever food experiences come our way, travelling or not.

Typical example: last month, we spent 2 weeks on a skiing holiday in Whistler, Canada. Being January, school holidays, the idea was to get away from the heat of Mexico and indulge in cooler weather before resuming our cruising schedule this year (I know, life is tough…trust me, we enjoy every moment while it lasts). We were joined by Australian friends David and Denise who had such a great time in Mexico with us, they decided to follow us and continue the party in Canada! The weather was suitably cold ( for us anyway, though the temperatures were above zero, pretty mild for Canadian standards), the snow on the short side but enough to have fun, and the best part for me was the variety of food available. Next to Australia, Canada must be the most culturally diverse country I know.

We rented a condo large enough to accommodate our party of 6, and with a full gourmet kitchen at our disposal, Denise and I elected to take turn in cooking dinners.  Food wise, with migrants from all over the world, the supermarkets are bursting at the seams with produces as varied as lemongrass, polish sausages, French baguettes, or Italian cheese! We stocked up for basic supplies with gusto in Squamish, a town 40 minutes from Whistler, where prices are at least half of what you pay in the resort town. That allowed us to eat (and drink) like kings: between spaghetti bolognese, giant rissole casserole, spare ribs, Italian chicken, homemade granola, curry nights, pancakes with bacon and maple syrup of course and much more…we felt a little smug when comparing the price of going out.

But you know me, always looking for culinary adventures, I used every opportunity to taste something new and I was on a mission to find out what Canadian gastronomy was all about. A quick look at the Whistler dining guide was enough to realise that we could only afford a couple of dinners out and my attention turned to lunch on the mountain instead ( you may call me cheap, I prefer to think of myself as discerning!). To give you an idea, lunch on the slopes cost an average of $17 (that’s the value of the lunch voucher given to Marc by his ski school!), as opposed to main course for dinner being anything upward from $25.

And they were very yummy lunches indeed: mushroom soup, 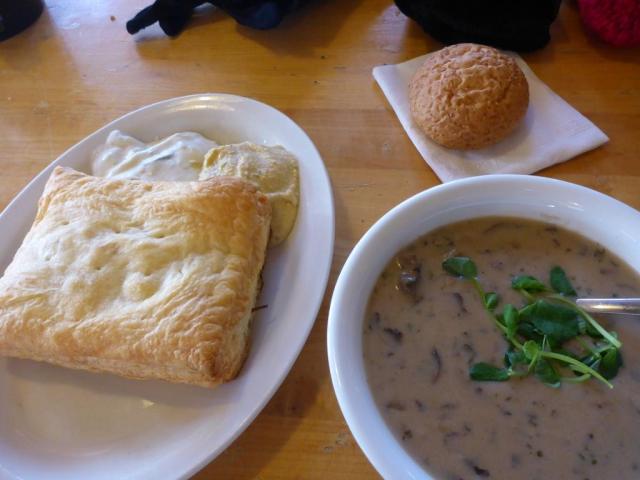 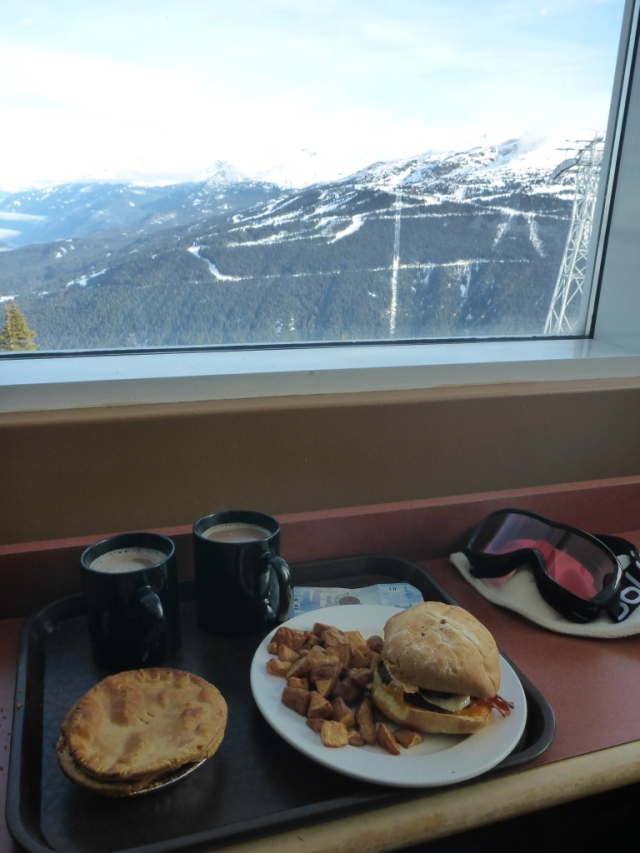 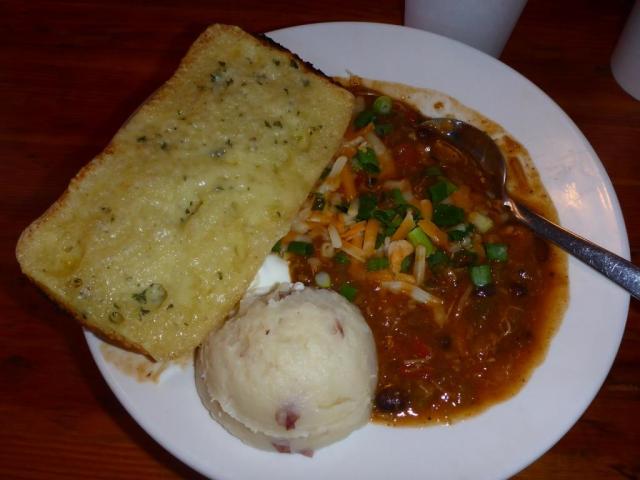 Food for champion! Except that the jury is split on the national dish called poutine, a bowl of French fries smothered in gravy and sprinkled with cheese curds. The kids absolutely loved it, I not so much, found it too sloppy. 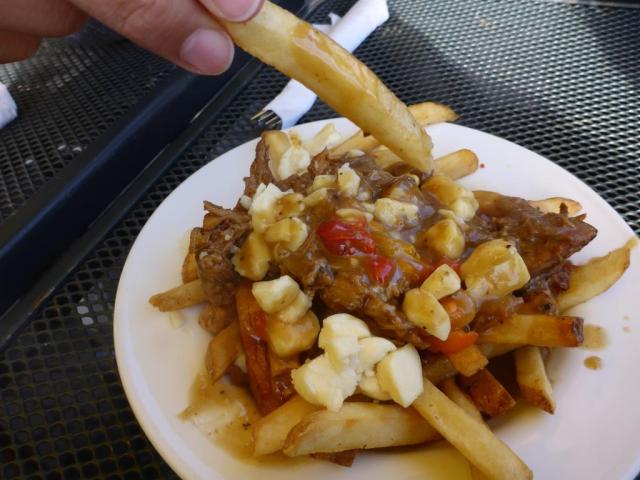 We did go out for dinner a couple of times, and the experience paled in comparison: in both cases, they were expensive steak houses with rave reviews. While the meal at RIC’s GRILL was OK (bison rib-eye for Terry, B.C salmon for me), it was not great for the price. The Aussie waitress from Mildura made up for it though, she was nice. 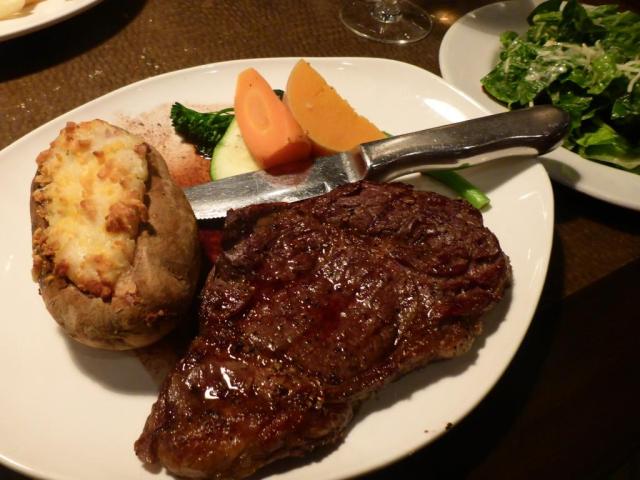 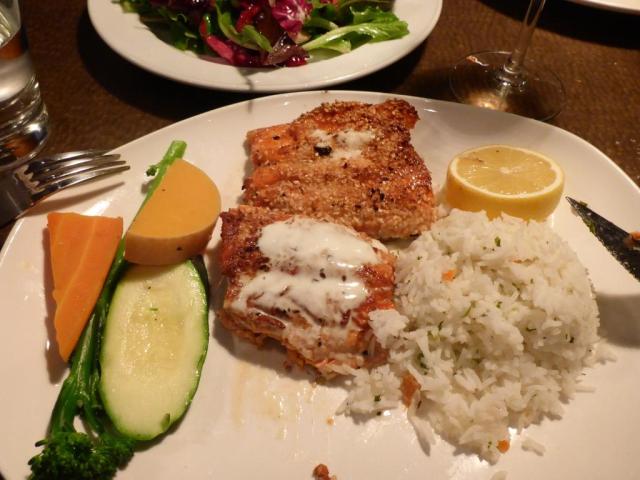 On the other hand, SIDECUT at the Four Seasons was a huge disappointment: this is the kind of restaurant that charges $50 for a steak then asks you to choose a selection of sides at $7 each. I was longing for lamb cutlets, and it turned out to be the best choice since it was served with its own garlic mash and Brussels sprouts. The others ordered steaks, which were good for nearly everyone except Terry who sent back his rib-eye that had come out very well done instead of medium rare. The service was atrocious (impatient and condescending), the atmosphere noisy and busy, and the final straw was when presenting us with a $600 bill for 5 (I deliberately leave Anne out, her kids meal was only $10); they refused for us to pay with a debit card. Maybe we are spoiled: my friends and I are good cooks, who occasionally like to have a night off and will pay for the privilege of a break from the kitchen (especially the washing up). However, I do take offence at being treated badly (like a bad student who doesn’t understand how restaurants are run!), and believe that the customer is king (or queen), no matter how many stars are attached to an establishment! 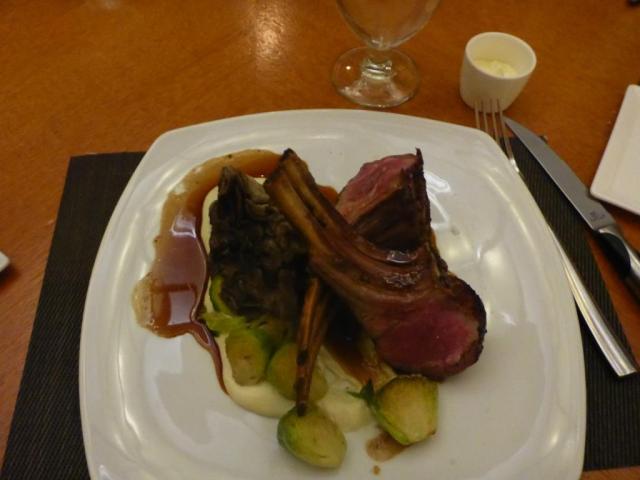 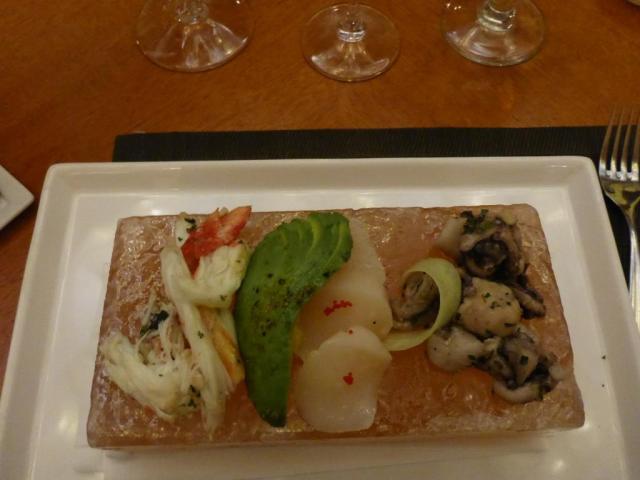 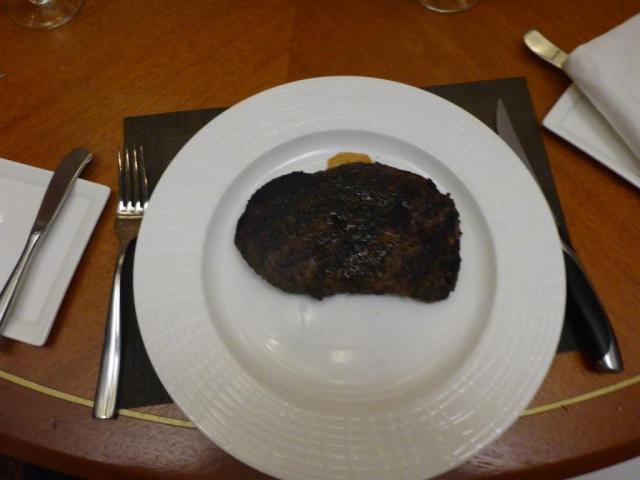 Well that was my whinge. On the positive side, we did find a gem of a restaurant in Vancouver for lunch, at the Marriot Airport hotel, of all places. The food was great, I was still on the lookout for anything quintessentially Canadian, but in the end happily settled for everyone’s favourite prepared with local produce: cod and chips for Terry, Alberta beef burger for Marc, B.C seafood salad for me, and double margarita for Denise! The waitress was fantastic, making us feel like she was running a taverna (maybe it was her Greek accent) and could not do enough to please us. We knew she cared, when after serving the boys their 4th beer, she asked if we were driving somewhere, and was relieved when we told her we were staying next door at the Hilton (or maybe, as Terry said, by law she would have had to cut us off!) 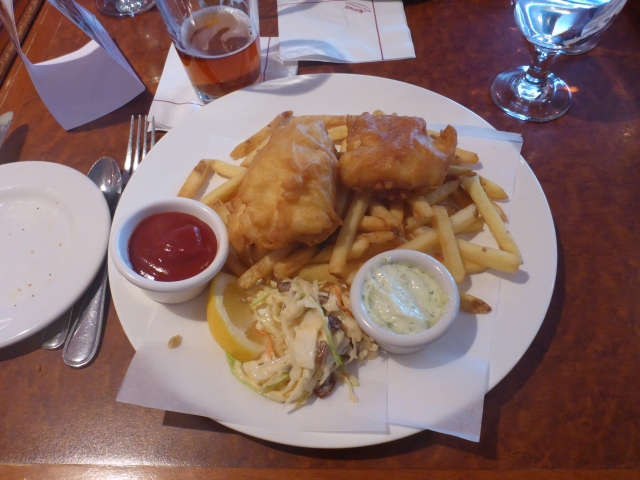 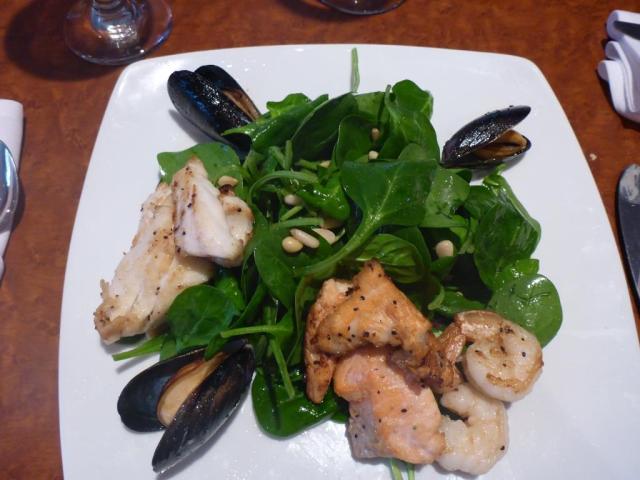 So happy with that lunch experience, I was looking forward to have an early dinner at the airport and would you believe: once we stepped into the international area, ALL shops and restaurants were closed. It was 7pm, and our flight was to be the last flight of the day scheduled at 8.30pm!!!  The only option was a Tim Horton’s outlet, Canada’s answer to Starbucks, hailed as the best coffee shop by most locals we’ve met. Knowing that it would be a long, food-free flight home to Cancun, we selected muffins and cookies (no savoury selection available). Intrigued by the “double-double” coffee all Canadians talk about, I convinced Terry to order a small cup while I played it safe with an ordinary black coffee. Oh, what can I say? The double-double means 2 teaspoons of sugar and 2 teaspoons of cream, enough to send a diabetic comatose in a flash. As for the black coffee, it was nothing but brown diluted water with an unrecognisable taste, certainly not coffee, which I hate to admit, I flushed down the washroom. What I wouldn’t have done for a Nespresso…

All is not lost though: I have procured myself with Grade A Maple syrup, Canadian bacon ( unlike US or English bacon, it has none of the surrounding fat, only the lean meat, much to Terry’s dislike!), and have every intention to enjoy a Canadian culinary experience…on the boat.

2 Comments on “Looking for Canadian gastronomy”

© Voahangy Steen and Galleyvantingaround.wordpress.com, 2014. Unauthorised use and/or duplication of this material without express and written permission from this blog’s author and/or owner is strictly prohibited. Excerpts and links may be used, provided that full and clear credit is given to Voahangy Steen and Galleyvantingaround.wordpress.com with appropriate and specific direction to the original content.
paxview