The funny thing about living away from your home country is that we are forever looking for signs or occasions to remind us of what we left behind. Well, I am anyway. Over the years, my memories of France tend to be more on the positive side (the food, the beautiful country side, the fashion, the indulgent lifestyle…) rather than the gloomy issues which no doubt did and would irritate me if I still lived there (the stress, the economy, the pollution…).

As much as I love travelling and have embraced different cultures with gusto, occasionally I feel homesick for France. Terry thinks that it is the idea of France that I pine for rather than France itself. And maybe he’s right, because though every trip back there is great, I always feel glad to leave again. I am sure there is some deep psychological meaning to all this, which I won’t delve into.

So it is that July 14th is always a big deal on our boat. It is Bastille Day, French National Day, which in France is celebrated with a military parade on Paris’s Avenue of the Champs-Elysees, and countless “bals musettes” and fireworks in the country towns and villages. I can’t remember anything special about the food, except delicious summer fare enjoyed al fresco with copious amounts of wine. If a boat is a miniature version of your own country (like an embassy, right?), then I like to transform VOAHANGY into a French territory on that day. Even more so than other days.

July 14th also happens to be Pandemonium Day and National Nude Day (I am not making this up!), and it was suggested to me that I was very close to score the perfect trifecta with a galley in disarray already, a French menu planned for dinner, all that was required was for me to cook naked. I didn’t win the trifecta, I wore an apron. But we celebrated everything else! And because it is more fun to eat with company, I invited my neighbour, Carol and her family who had never heard of Bastille Day (or Pandemonium and Nude Days either!)

On to the menu. It was a hot and sweltering summer’s day, so I wanted a cold starter. I had 5 adults and 5 teenagers, not sure of their likes and dislikes so had to play it safe with the main course. And dessert had to be a family favourite (always, I almost never do dessert experiments when I have guests, it needs to be tried and true). So this is what we ended up with: Chilled Asparagus Soup, Baked Bacon-Wrapped Chicken and Roast Potatoes, Apple Tart. Of course, we drank French Champagne and Bordeaux wines, and by the end of the night the boat was in complete pandemonium but in a happy kind of way!!! 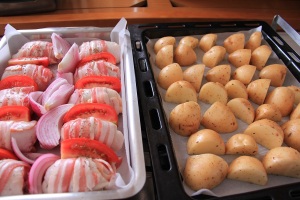 Baked bacon-wrapped Chicken and Roast potatoes in the making

This is so simple to cook, I would call it more a method than a recipe. Also, when cooking chicken pieces and potatoes, you will note the quantities are in pieces rather than weight as I find it easier to visualise how much people eat this way.

Wrap one bacon rasher around a chicken thigh, making sure the loose end is tucked underneath. Place on a baking tray, previously lined with parchment paper. Repeat the process for the rest of the bacon/chicken. You will need 2 baking trays.

Tuck tomatoes and onions quarters tightly between the chicken parcels (don’t worry if it looks really tight, they will shrink as they cook!). Sprinkle thyme, salt and pepper all over.

Bake for 45 minutes or until the chicken parcels are golden and crispy looking (check for doneness by sticking a knife in, once is enough, and ensure juices run clear, not pink).

There is no need for olive oil or liquid to be added. The chicken skin and bacon combined release enough fat and juices to make a delicious clear gravy to pour over the potatoes!

My favourite way of preparing spuds, no peeling, no mess, it can be cooked in the oven at the same time as the chicken.

In a very large bowl, combine olive oil and dried herbs. Cut potatoes in quarters, place them in the bowl and toss until all pieces are covered with the oil/herbs mixture.

Transfer the vegetables onto a parchment-lined baking tray, sprinkle with salt and slide this in the oven.

Bake for 45 minutes or until golden on the outside and soft on the inside.

** Both these dishes can be prepared a few hours in advance, kept in the fridge until ready to bake. The quantities can be adjusted up or down to suit the number of guests, same with the cooking times.

← Welcome to my galley!
July Happenings →