Welcome to our first Halloween party! Yep, it has taken that many years for us to succumb to the Halloween madness, always finding an excuse: French people don’t celebrate it, our generation didn’t grow up with it, treat or tricking makes no sense on a boat, don’t like scary things anyway…then we had kids, we spent some time in the USA during fall season, and lately social media is swamped with Halloween references!

So it all started with a Sunday lunch invite at our place last weekend. As always our family get togethers follow a theme, and this time being so close to Halloween, I thought it a good idea to make it the overall theme. It was initially meant to apply to the food, but as I poured over cookbooks, magazines and blogs researching related food props and table settings, I found myself at this party supplies shop loading up on more Halloween decorations that I ever bought in my life! I blame this particular blogger who I follow for her quirky and delicious posts, particularly at Halloween time and somehow made me believe I could throw a ghoulish party at a few days notice! Lucky it helps to have a teenage daughter who is into anything gory and gruesome and knows what it takes to achieve maximum effect.

The party was to take place at home and after much consideration for our guests dislikes and phobias ( i.e. spiders and severed body parts ) we settled on a mixed theme of haunted house and skeletons. I went crazy starting with Haunted Scene tape on the doors, acquiring a couple of hinged skeletons, a dozen skulls, countless rats and baby spiders, enough spiderweb to drape over a couple of rooms, a little ghost and eyeballs to float into drinks! I even uncovered a ghost- like photo of myself taken 30 years ago which I framed and displayed next to more skulls and spider webs… 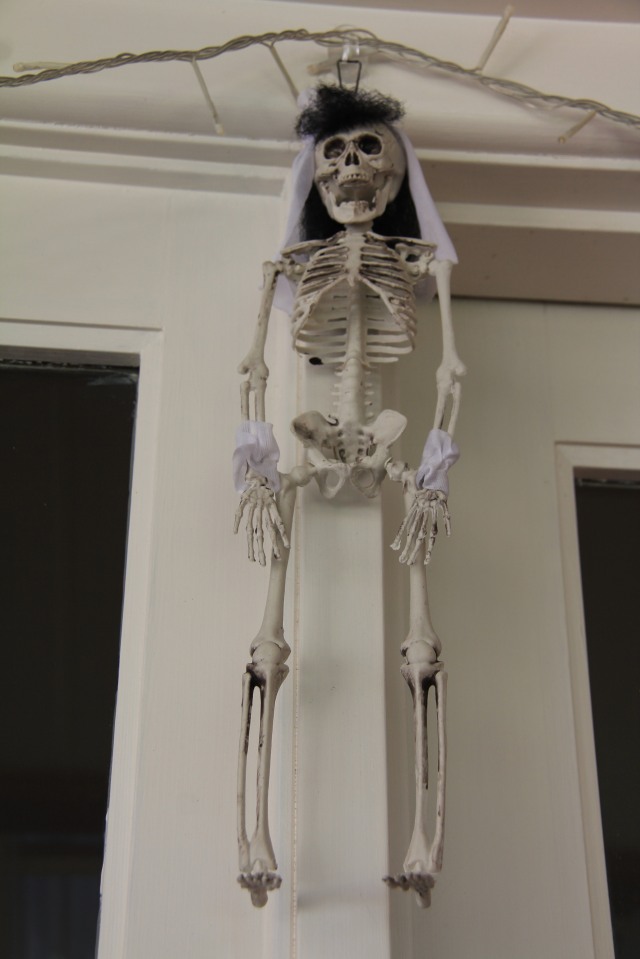 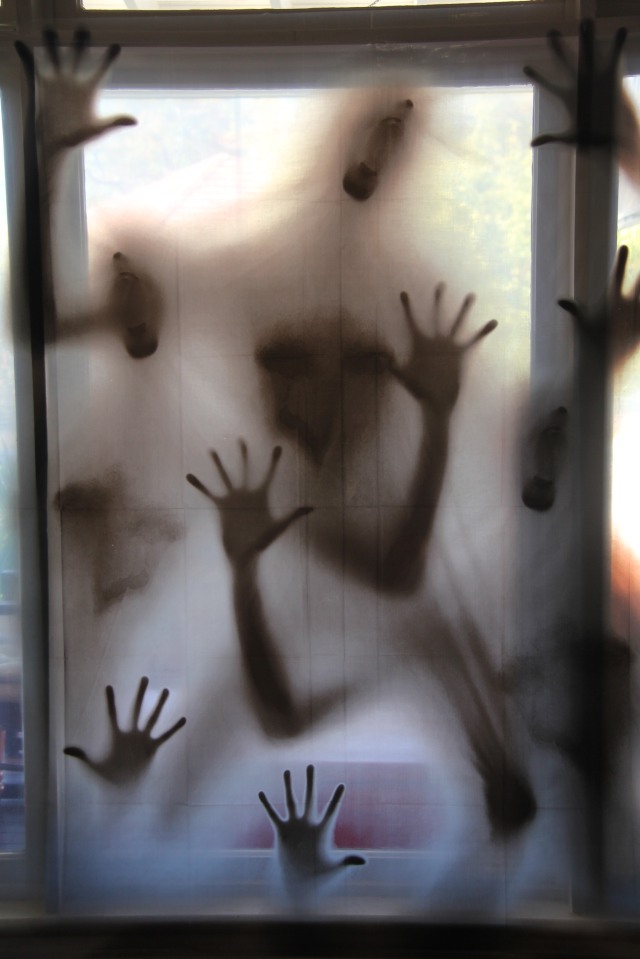 Couldn’t leave the toilets alone either and stuck a skeleton poster on the door while covering the seat with pictures of spiders ( that pushed the envelope a bit for some…hehe!). I will spare you the photos! 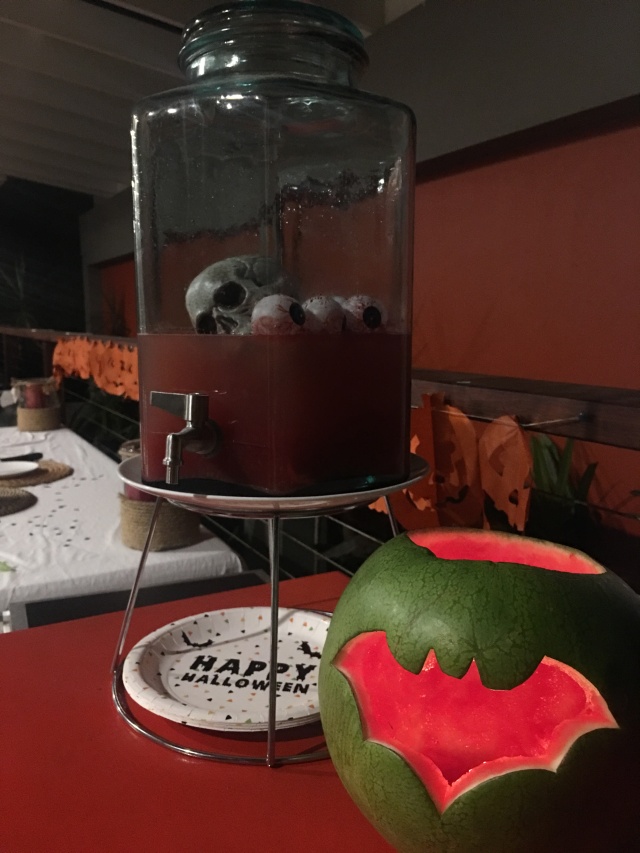 Dress up initially optional, was heavily encouraged to keep with the party spirit.
I could not decide what to be, between a witch or a fairy so I mixed them both, figuring that the hat would fit either description. Mr T went for the Black Ripper, which looked oddly realistic and had the merit of being very comfortable to wear. Anne wrapped herself in a white sheet, intending to be a ghost but looking more like a medieval maiden. Shelley and Tania came as the Devil and Maleficent, accompanied by pirate Jai and monster shirt wearing Matt ( who I suspect played it tame because he had no idea what to expect! )

Top prize must go to the youngest kids though with Jesse dressed as vampire Dracula and Hannah eerily scary in her ghost outfit straight out of the Ring movie set. How can 7 and 8 year old look so spooky?? 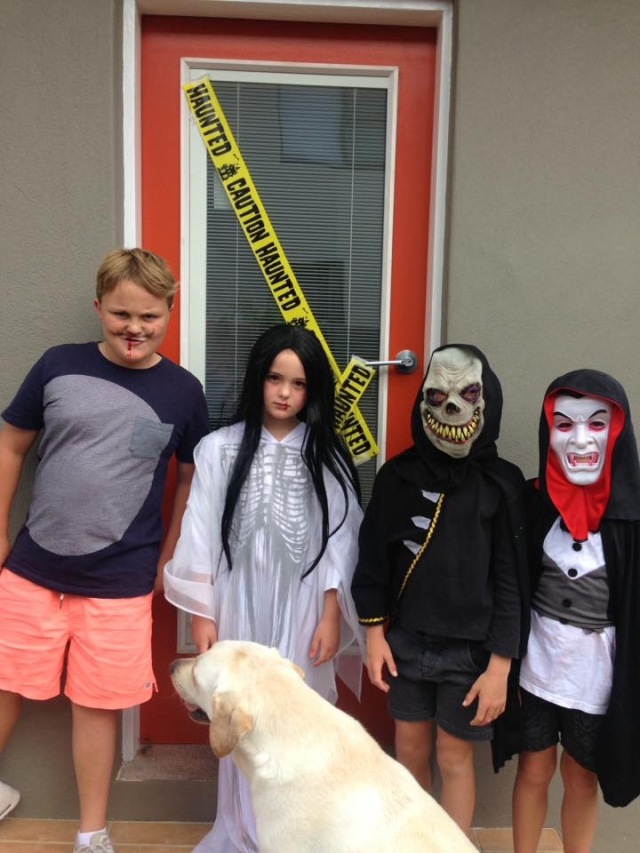 The munchkins. Photo by Kathy

For drinks, I had peach bellini cocktails to welcome guests. It was quite popular with the girls in the kitchen, but the boys thought it too sweet and dainty and stuck to beer ( no surprise there!)

More success with the kids drink: fresh watermelon juice mixed with lemonade, pourable from the urn, went like a treat and kept them hydrated all day.

As is tradition, our guests were asked to bring a dish each as a contribution to our banquet. Shelley jumped in with the idea of a brain, made of salmon mousse and dotted with black fish roe to resemble blod clots. We ended up serving the former on a bed of lettuce and the latter separately, thinking the initial concept might have been to gross…

I liked the thought of serving black food for Halloween and came across the recipe for Black Hummus on this blog, which I tried to replicate not without some challenges. I had to order black chickpeas from Melbourne, my blender barely coped with the amount of black sesame seed to turn into tahini then mix with the chickpeas to make the hummus ( I am now officially in the market for a high-speed Vitamix-style blender ). But the result was a striking looking dip ( if a tad greyer than on the blog’s picture) perfectly matched with the colourful corn chips. 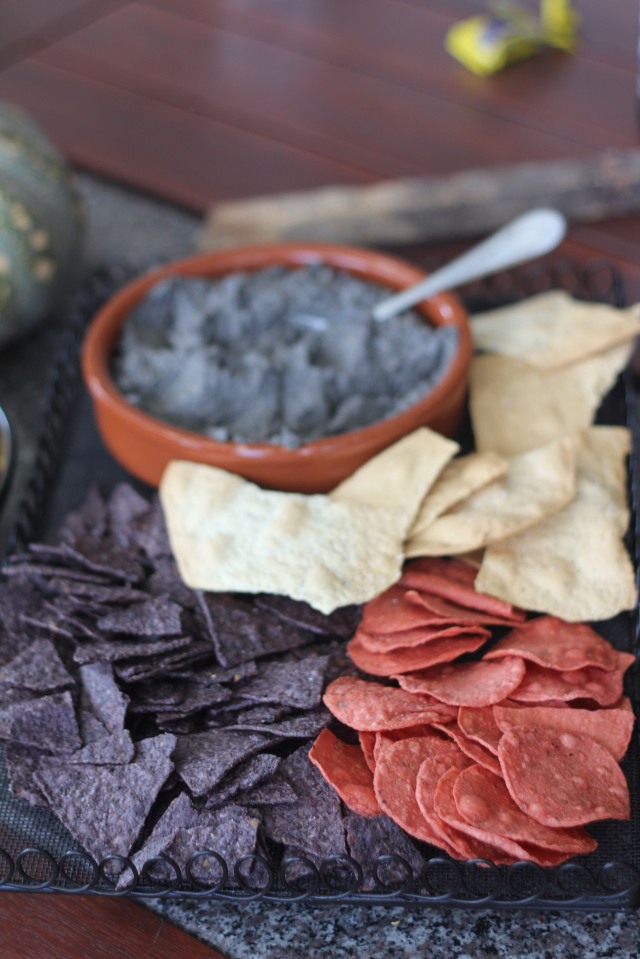 And while we’re on colours, you can’t go past a black wooden platter loaded with orange cheeses. We had 4 types; a mild Leicester, a not-as-stinky-as I’d like washed rind, a potent cheddar and black garlic we purchased a few weeks ago in Tilba and an evenly scented piece of truffle pecorino brought by Tania and which I tried to keep for myself! We served them alongside charcoal crackers and black seeded crackers I made after reading a similar recipe in NQN blog a few days prior.

Tania said she was dying to try a ribs recipe on our bbq, which was music to my ears as a) everyone loves ribs b) I had been meaning to make this for the longest time!

Danielle had the carb-lovers ( meaning everyone! ) covered with mac and cheese. Rosalie brought a tangy potato salad and I made a multicoloured coleslaw, which is not very Halloweeny but I figured people might feel like something green and crunchy at some point. 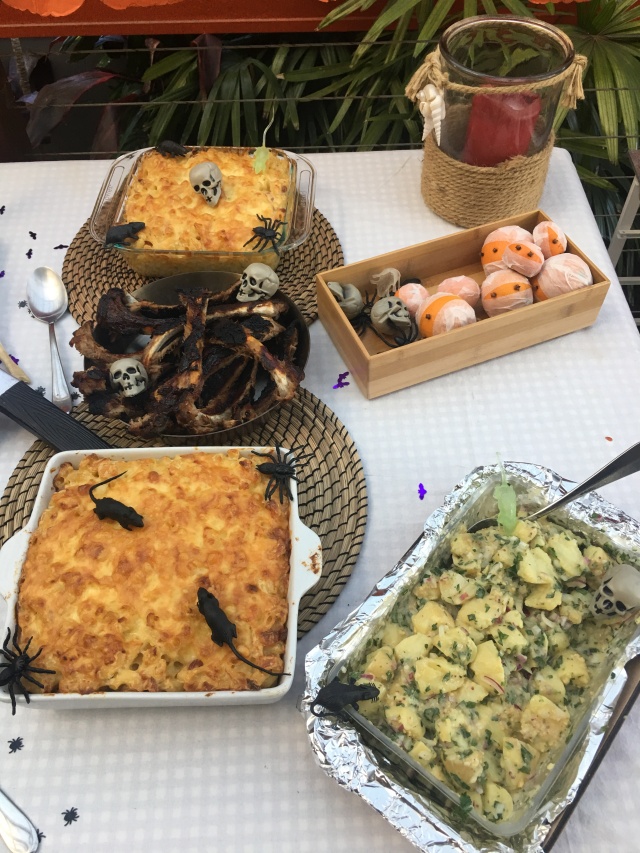 As for the sweets, the piece de resistance was a White Chocolate Mud cake Kathy purchased from New York patisserie, a local family favourite. It was such a pretty cake, we felt bad adding rats and spiders around it…only for a second though! 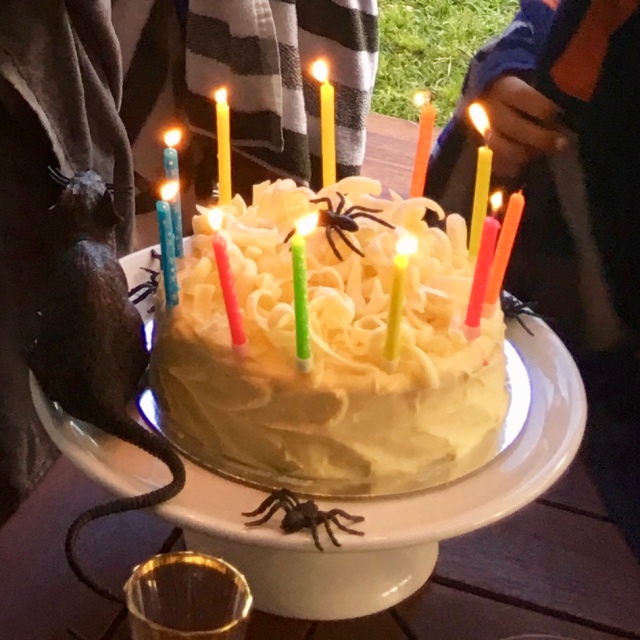 I had also made green goop ( i.e tapioca pearls in pandan coconut sauce ) which some of us partook in… the ones who were not full, that is.

Of course there was a lolly bowl, filled to the brim with wrapped candies and chocolates and for which the kids didn’t have to trick anyone.

We ate, we drank, we talked about scary shows ( Stranger Things Season 2 is on everyone’s radar at the moment!), laughed at each other, watched the kids slip out of their costumes into the swimming pool and scolded them for eating too many lollies so close to bedtime…waving goodbye long after darkness had fallen.

It is somehow nice to celebrate Halloween a few days in advance. That way you can stretch the fun a little longer, a bonus considering the effort of putting it all together. As I write, I am told how Kathy tricked the kids with spiders in their lunch boxes yesterday. The same way I laughed when Mr T found rats at the bottom of the sink last night. As for the ghost behind the toilet door? He is still there, oooohing the unsuspecting. I am told the joke is wearing thin, still one more day though…

To those who are into it, Happy Halloween!! For the ones who aren’t, here are a couple of black recipes for a Goth-like party anytime.

In Australia, I found black chickpeas from a specialty indian grocer in Melbourne. They take longer to cook than white chickpeas, especially if like me you forget to soak them before hand, you will need to simmer them for at least 3 hours.
The black tahini is available online at Harris Farm and some organic stores. I wish I’d known. before I embarked on making my own and nearly ruined my blender in the process.
I used a food processor, as instructed in the original recipe. It took a long time, some extra water and the texture was still a little grainy for my liking. I am now investigating a high speed blender ( Vitamix or Nutribullet?) to achieve a “whipped” result. Stay tuned.
This recipe makes a lot, but it keeps in the fridge for months ( apparently!)

Adapted from Not Quite Nigella

I was originally looking for a charcoal crackers recipe when I came across Lorraine’s gluten free seeded crackers. I already had a lot of seeds and nuts from granola making so it was not a far stretch to turn them into savoury treats. I only tweaked the recipe a little, adding charcoal powder and using black sesame seeds left over from the black tahini efforts! I also substituted soya sauce for nori seaweed. You can’t really taste the charcoal, but it is definitely crunchy and tastes nutty as! This is great to make in advance as it keeps in an airtight container for a few days. 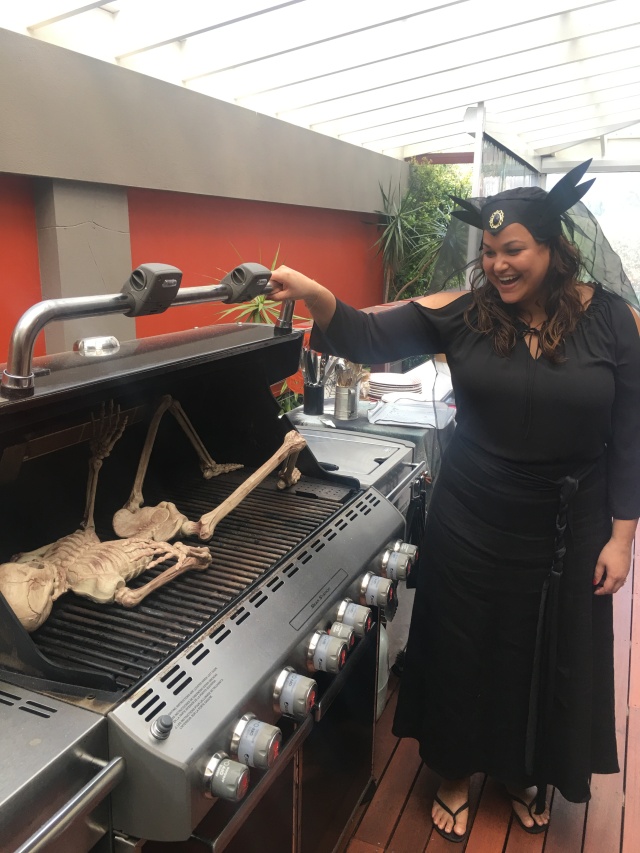 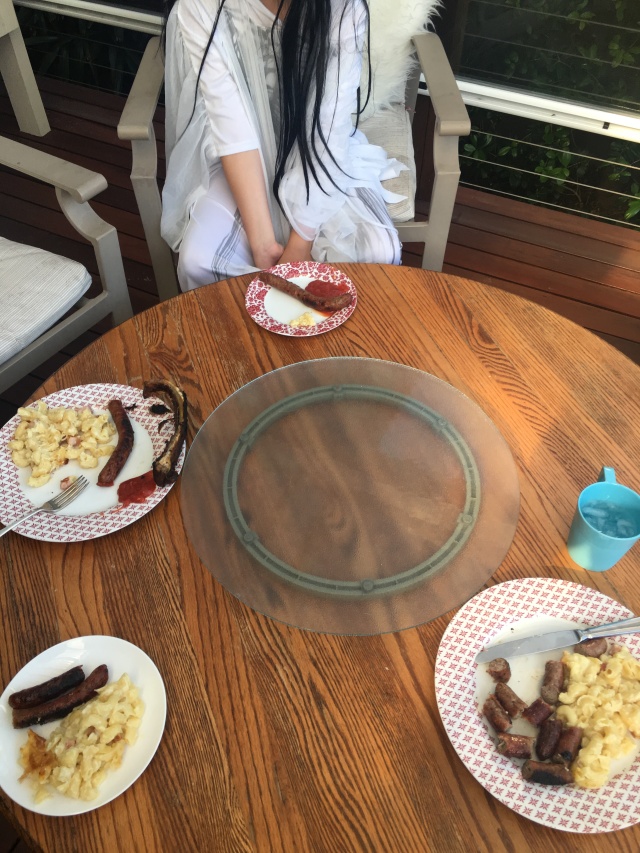