Dinner in the Marquesas 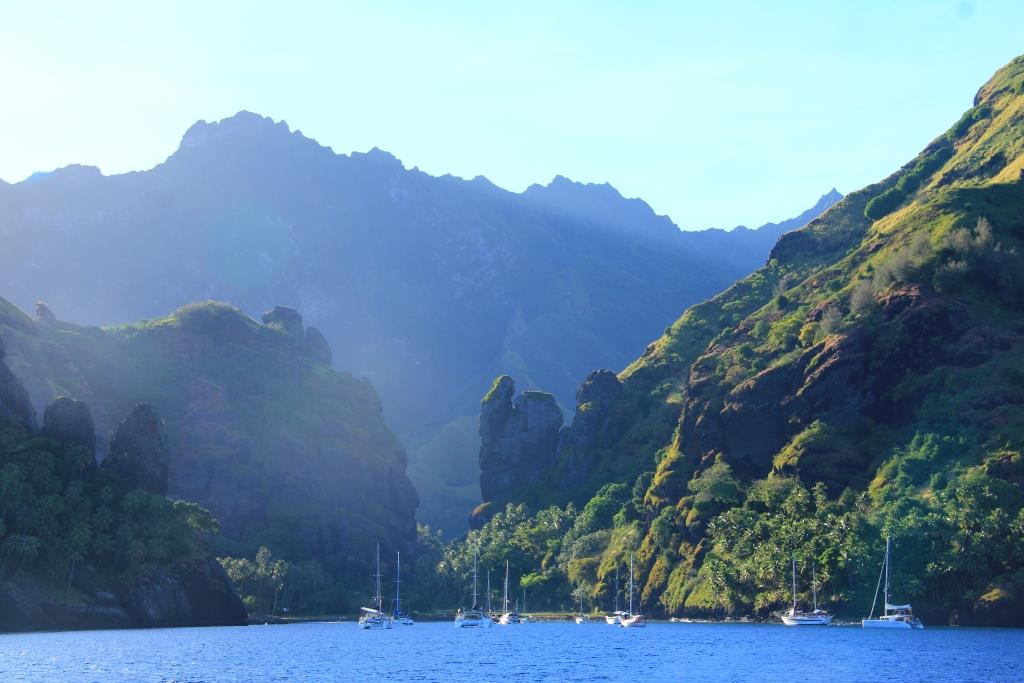 After 3 weeks at sea, we landed in the Marquesas last month. This archipelago of 12 mountainous islands is as remote a destination as you get: 6000 klm west of the Galapagos and south of Hawaii, the closest neighboring islands are the Tuamotus, 1000 klm to the west.
The Marquesas were originally settled around 340BC by tribes coming from western Polynesia (Tonga-Samoa). These are believed to be descendants of austronesians who started their eastward migration from South East Asia about 7000 years ago, against currents and winds, bringing with them all they needed, fantastic navigators, warriors, cannibals,… They developed their own culture and presumably lived very happily (occasionally fighting and munching on each other), until the Europeans reached the archipelago in the 16th century. First the Spaniards, who landed in Hiva Oa in 1595, followed by British, French, Russian and Americans, as well as various whalers and traders. France took possession of the islands in 1842, but apparently the Marquesans, nearly decimated by diseases and fights , remained fierce warriors, resisting the rules and orders imposed by the occupant. In 1849, the French physically left the archipelago for Tahiti deciding it could not offer anything positive to the colony. The French still own the islands though, probably more for geopolitical reasons than anything else, and pour a fortune in them.

Bar 3 gendarmeries, 2 hospitals ( and countless small dispensaries in every village), 4 airfields and a tourism office, there is barely any sign of any economic activity beside copra ( the dried section of the coconut meat, valued for the coconut oil extracted from it). Island life revolves around the fortnightly arrival of the Aranui 3, a mixed cargo ship that brings supplies and passengers. The locals grow their own fruits and vegetables, catch their own fish, hunt for pigs and goats (or keep a couple in their garden) and generally spend their money on tin food from the small supermarkets. Hanavave on Fatu Hiva has one very small shop which sells basic items ( I reckon I have more choice on the boat) while Taiohae in Nuku Hiva has 2 grocery shops and a hardware store, each no bigger than an IGA store in an Australian suburb and storing a mix of French, Australian, NZ goods. Shopping is expensive, how anyone can afford to buy anything there is beyond me, but in dire circumstances I’m learning to buy whatever I need regardless of the cost. Below are our findings during one of our shopping expeditions:
80F = A$1, 120F=1 Euro
Beer 300F for 1 can
Soft drinks 270F for 1 can
French butter 1000F
NZ butter (in a can) 400F
Pringles 340F
Vodka 6900F!! a bottle
Wine 2100F (cheap no name brand)
Diesel fuel 100F per litre Duty free, 165F incl tax! ($2! Twice the Mexican price)
The only cheap items we found were bread (66F) and fruits & vegetables sold at the market or on the side of the road in Nuku Hiva, traded for cosmetics and a length of rope in Fatu Hiva. Luckily fish is free, as we catch it ourselves. But we’ll learn very quickly to be frugal with our supplies, and make the most of the natural abundance of fresh produce.

Our very first Marquesan culinary experience was a dinner cooked for us in Fatu Hiva: no sooner had we set foot ashore that the villagers approached us and invited us to a dinner and show at their community house for the next day. It turned out to be an initiative from the Fatu Hiva Mayor’s and tourism office, to welcome cruisers to the island. About 25 of us showed up and were treated to a Polynesian feast of coconut chicken, poisson cru, green papaya salad, breadfruit chips and boiled bananas (the latter an acquired taste!). When we all had full bellies, the local ladies invited us to the dance floor for a hips swinging lesson for us girls, and a knee twisting session for the boys. It actually was hard work, and we all wished we didn’t eat so much before, but oh what fun it was…especially when all the yachties in the room had been confined to the inside of their cockpit for weeks during the ocan passage and could finally shake these legs!!!

The coconut chicken was a hit among the crews, with the unusual use of papaya in the sauce. I could not resist, I went to Angela (one of the organisers) and asked for the recipe which she was happy to share with me. I’ve cooked the dish onboard a couple of times and we’ve enjoyed it so much I thought I’d spread the magic of the Marquesas by sharing the recipe with you all.

1. Boil chicken in 4 cups of water (enough to cover) in a large pan. Simmer until just cooked. Remove from stock and set aside
2. Boil papaya in chicken stock.
3. Reduce chicken stock to 1/3, add onion, garlic, coconut milk, salt and pepper, and bring to the boil.
4. Add cooked chicken pieces and papaya, warm up for a few minutes, season to taste.
5. Serve with rice, sprinkled with green shallots.
6. Enjoy!

← Banana bread
Getting up early in the Marquesas →

4 Comments on “Dinner in the Marquesas”