It is 6.30am and freezing cold. We are standing outside Painted Cliff complex, on the side of the road, waiting for the inter-resort shuttle to pick us up. I look at our 4 suitcases, 4 carry-ons and the 2 cartons of groceries and drinks we didn’t use during the week and plan to take with us to Sunpeaks and wonder if there will be enough room in the shuttle… As it turns out, we are the first to board, so we have the luxury of an empty luggage compartment. Though it will a full bus today with 10 passengers, I am assured that there is room for all our baggage, and that whatever happens “the beer will not be left behind!” Did I mention that the driver is Australian?

I have been looking forward to this bus ride along Hwy 99, hearing that is one of the most scenic drives. However it is pitch black, the road is full of twists and turns and we’re going really slowly due to the heavy snow and somehow I am sitting in the middle of the bus, while Terry and Anne have window seats. So I decide to have a snooze and ask them to wake me up when the sun rises, so that we swap seats and I can take pictures. When I open my eyes next, we are approaching Lilloet, and are evidently leaving the Coastal Mountain range behind. Tall peaks are making room for cliffs and dry, scrubby valley walls overlooking the Fraser river. The highway winds its way along frozen lakes, desolate looking prairies, closed barns with machinery sitting idle closeby…the scenery looks and feels like it is hibernating while waiting for spring and I am struggling to feel inspired during the 5 hours it takes to reach the city of Kamloops, home to Sun Peaks resort, a mere 45mn away.

By the time we reach the resort village, we feel cold, slightly underwhelmed by the weather (grey), and the landscape (yellow-brown), and after ending our Whistler stay on such a high I am wondering what to expect from Sunpeaks.

As happened the week before, we have arrived at lunchtime, hours before check in time. Not a problem for our vacation rental managers, Cage and Deb from Top of the Mountain, who allow us to leave our stuff in the garage so that we can wander in the village for a few hours.

First impression: Sunpeaks is much, much smaller than Whistler and it takes us all of 30mn to explore the village. We locate the ski rental shop in the main street, organise our gear and decide to check out the local eateries. To our surprise, most of the restaurants are closed for lunch (on a sunday?), only the casual joints are open and they are all full apart from the 5 Forty Cafe and Deli. We squeeze into the small eating area, with our order of poutine for Marc, burgers for Anne and Terry and chicken panini for me. Food is tasty and welcome as we all skipped breakfast earlier (the butter tart, purchased at our pit stop, does not count!). Terry would be happy to hang around there drinking beer for the afternoon but he ends up being dragged away to the Guest Services office to collect lift passes and book lessons instead. Getting around is so easy: most shops and services are located in the village at the bottom of the slopes, there is one main street, which you can ski on since it is covered in snow! The village itself reminds us of some of the French ski resorts, with its european style architecture, quaint shops and cafes all within a short stroll of each other.

Our accomodation in Snow Creek Village is only a 5 minutes walk from the village, and as in Whistler, 50m away from the slope. It is a spacious 3-level townhouse, with plenty of room for 2 families (or a group of schoolies, says Marc) which is just as well as our boating friends, Yogi and Steve, are following us to Sunpeaks. They will stay here for a few more weeks so they have their own accomodation in the village, but our place being so big and boasting a private spa on the balcony it will prove to be a great entertainer for us all. 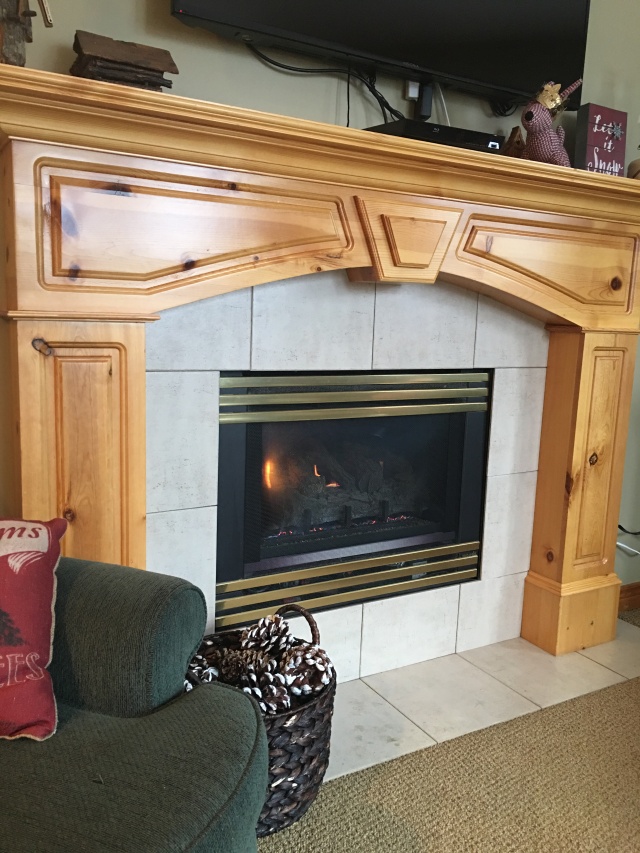 As I mentioned earlier, Sunpeaks is smaller than Whistler. By far: the skieable area is half the size, number of lifts a third less, and ( the best part ) the lines are noticeably shorter, when there are any. It is also much quieter. People come here to ski or work, and during the day, the main street is so quiet, you could hear a snowflake drop. Come night time, folks come out to partake in mostly family activities like night skiing, snow tubing, ice skating or a good old apres session at one of the bars. No loud music on deck or wild parties here, not outside or after 11pm anyway. That’s the way the locals like it, and it is explicitly mentioned in our welcome pack with a copy of the Council By-Laws included. 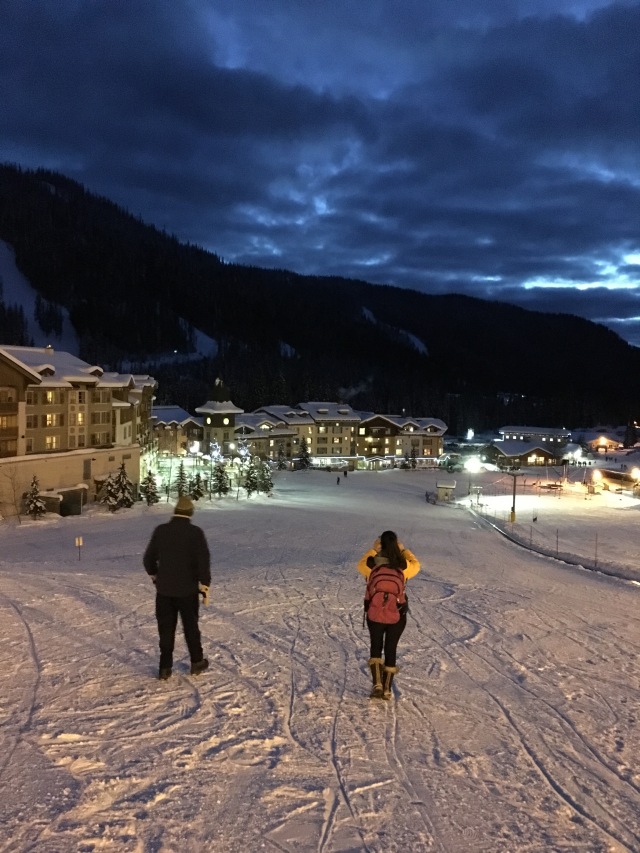 This said, what Sunpeaks lacks in extreme excitement and sophistication, it makes up with its winter wonderland charm, easy access to all the activities and the best powder we’ve ever skied on ( as fluffy as champagne! ) Yogi and Steve, who have plenty more experience with powder skiing as we do, are over the moon with the dry snow quality, and Marc, who along with Anne decided to take up snow boarding, is thankful for the soft powder to land on ( Anne reckoned a bad fall is a bad fall no matter how soft the snow is, and returned to skiing after one day, reasoning that being an already good skier, she should stick to it and explore the mountain instead of spending her week practising on the beginner slope!) It is love at first sight for Terry and I, after taking a wrong turn and finding ourselves on the Mt Morrissey side of the resort. The only way home was by skiing thru tree studded glades, not quite off piste but the runs are unpatrolled and so scarcely frequented that it is easy to find a line with untouched powder. What started as an open section between two clusters of trees morphed into an obstacle course with trees closing in as we made our way to the bottom. While I found it fun and challenging ( this is nothing like we’ve done before!), Terry who had heard about tree wells and snow suffocation, was horrified and kept far away from the trees. He did enjoy having the slopes to himself though! This is a feeling repeated all thru the week no matter where we go: once the crowds scatter at the top of the chairlifts, there are enough long cruising blues, challenging blacks and wide open greens to accomodate everyone and feel you’re on your own. All we need to make it perfect is some sunshine, though the locals assure me they prefer cloudy skies as it means more snowfall (it has not snowed for a few days, not that it matters to us, the air is so cold nothing is melting!) 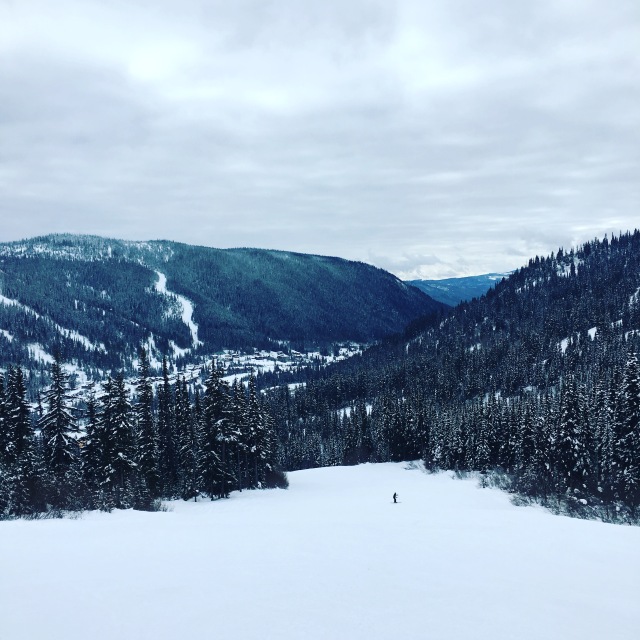 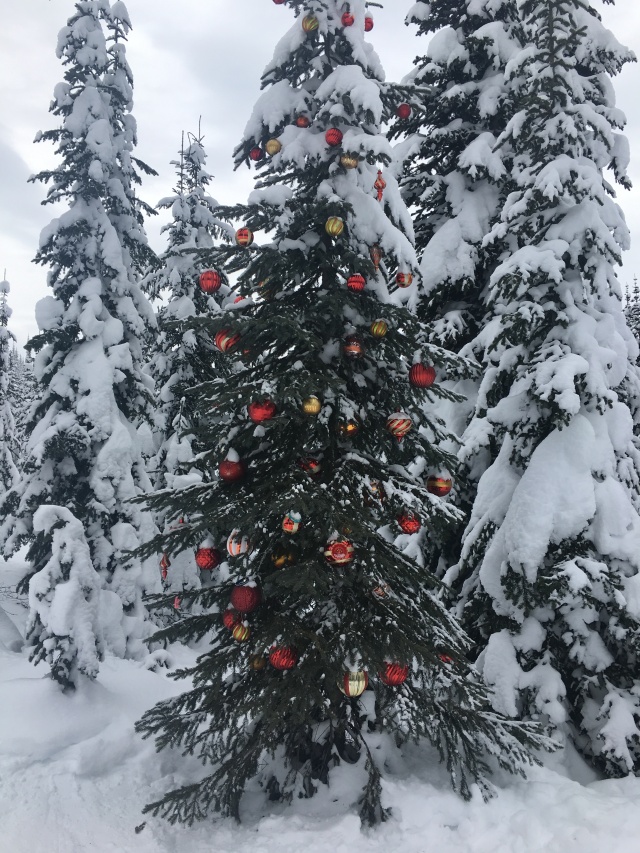 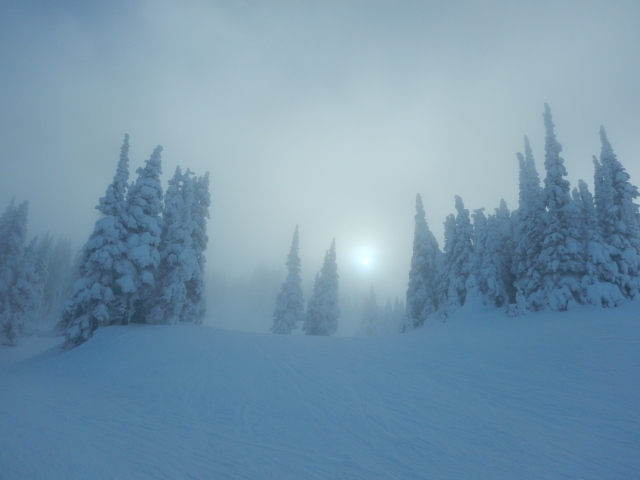 Yogi and the boys join us on the hill every day, the kids taking off together while we adults explore at our own (slower) pace. We all stuck together though to reach the Top of the World ( at the peak of Mt Tod) on one of the coldest day ever! The pictures do not show the frost bitten fingers and toes, nor can you hear the annoyed comments from Terry and the kids being dragged away from the warming hut and forced to pause by -10C. But the discovery thru the fog of these eery these snow covered trees: priceless. 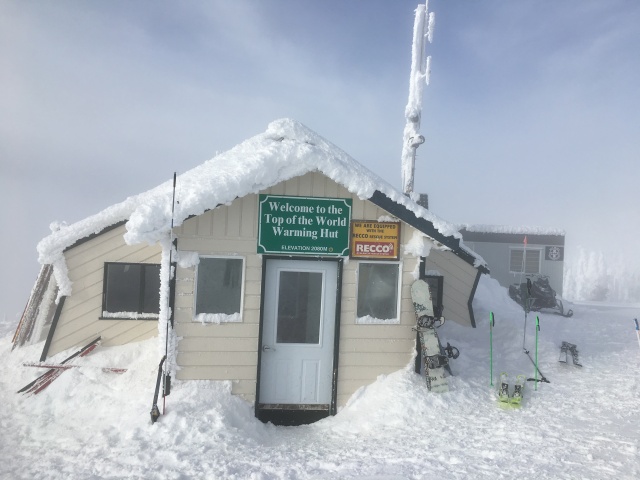 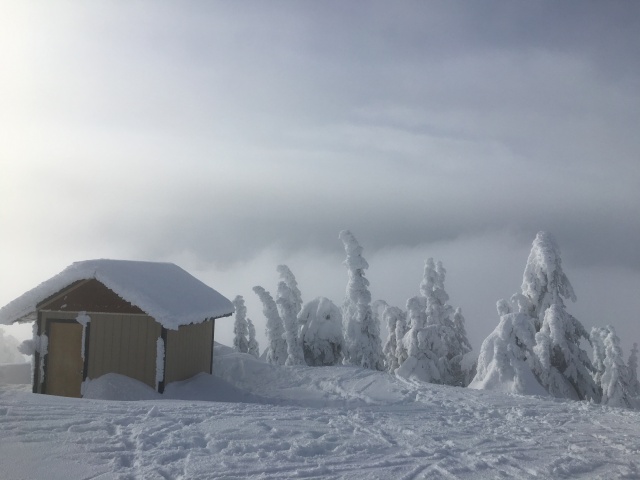 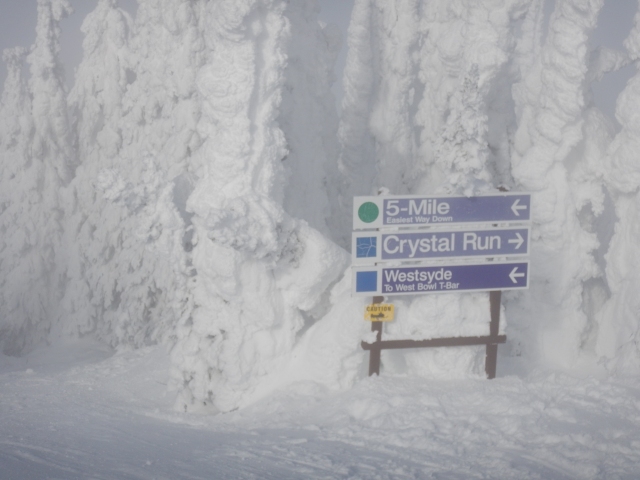 As for Sunpeaks dining scene, with 20 restaurants and bars, while not as extensive an offering as Whistler it is much simpler to choose. Learning my lesson from the previous week, I enquired about the top formal restaurants from the start and booked a table at Voyageur Bistro 4 days ahead. The menu is typical Canadian fare with dishes ranging from Poutine to BBQ maple glazed pork ribs. I can’t tell you how much fun we had picking dishes, all quite different: Appetisers were smoked oyster gratin, duck drummettes, beer and bacon marmalade as well as poutine ( the latter is part of the never ending challenge to find the best poutine in B.C!) 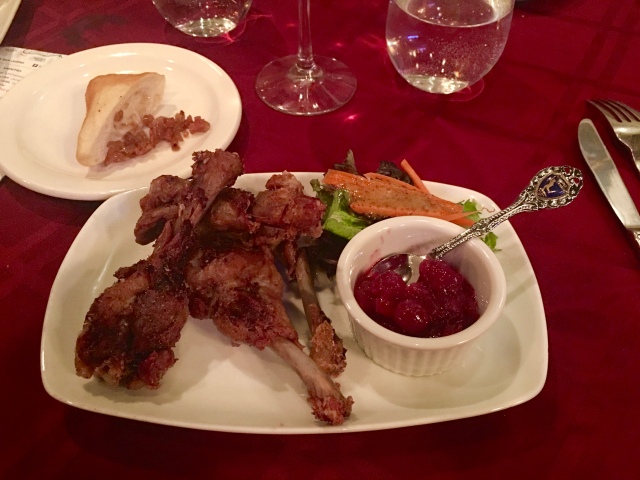 Mains we chose were Elk Wellington, Arctic char, Bison burger and Voyageur Tourtiere ( a Canadian meat pie ) All dishes were delicious and quite unique, a lovely change from your usual grill, still very comforting indeed. Rather than formal or fine dining, I would classify it as upmarket pub fare however. 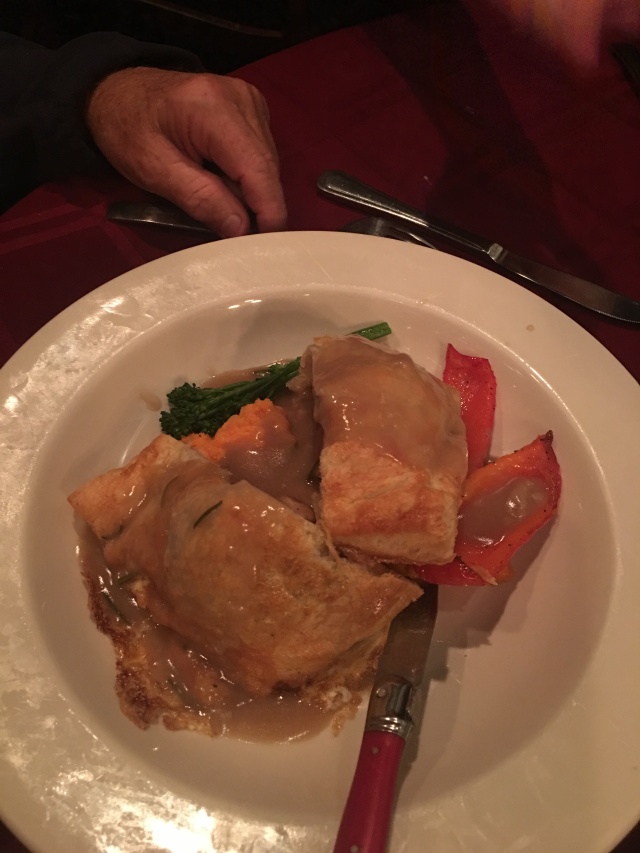 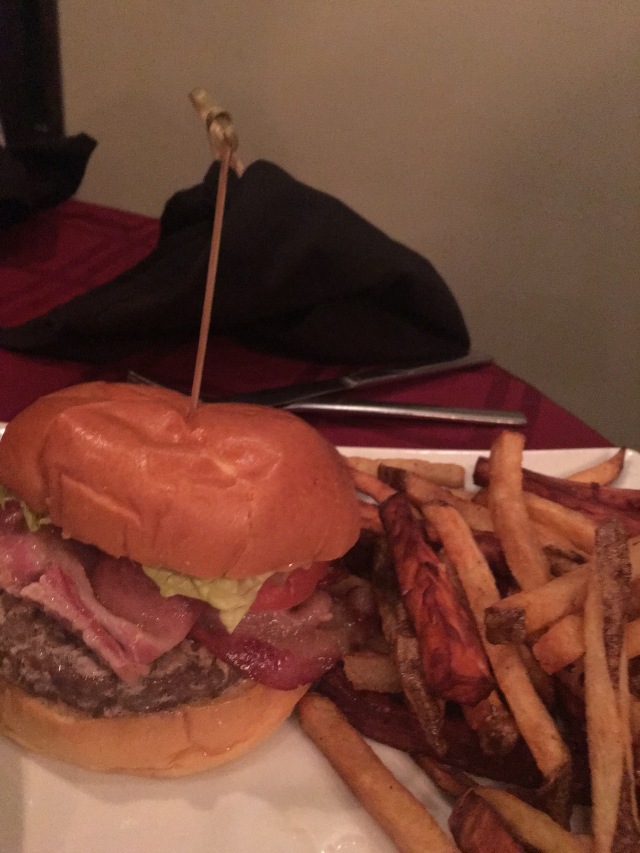 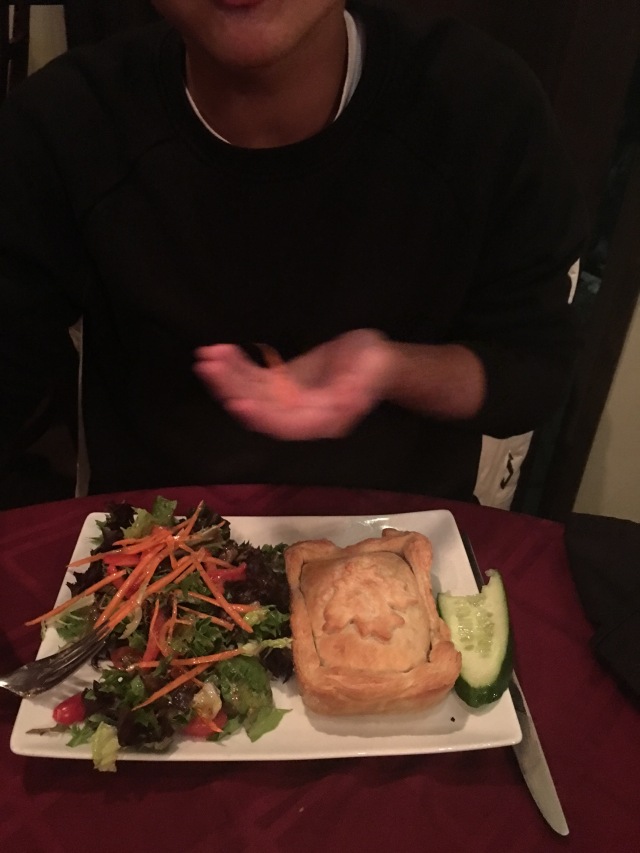 No shortage of casual and day eating cafes, and beside 5 Forty, we enjoyed excellent pizzas at Mountain High Pizzas (though not as good as Whistler’s Creekbread..), tasty sausage rolls and spinach pastry at Bolacco Cafe

and a hearty lunch at Masa’s 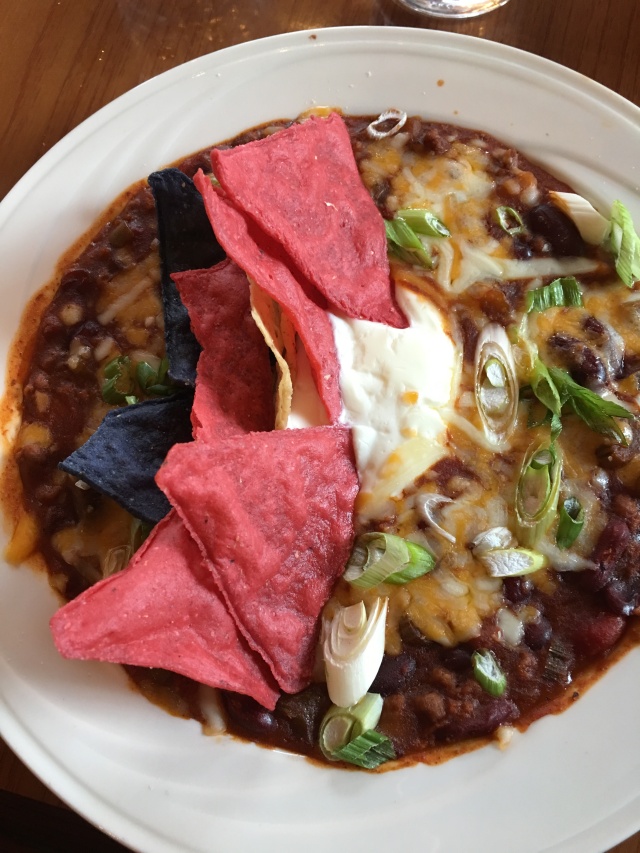 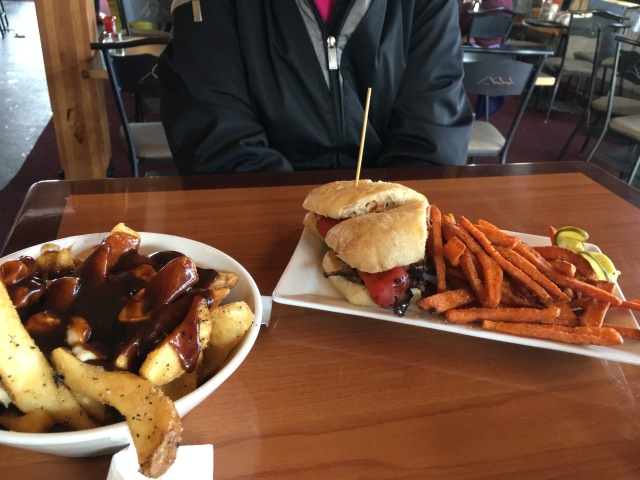 The latter put on a special night for Australia Day, showing the Australian Open broadcast and playing the Triple J 100 countdown. Terry and I went there for pre dinner drinks around 5pm and it was dead, Marc chose to head over after dinner and stayed until 1am, reporting that the place was packed full of Aussies!!! Just when I thought we had finally discovered nightlife in Sunpeaks, I was told Australia Day is the busiest day of the year… 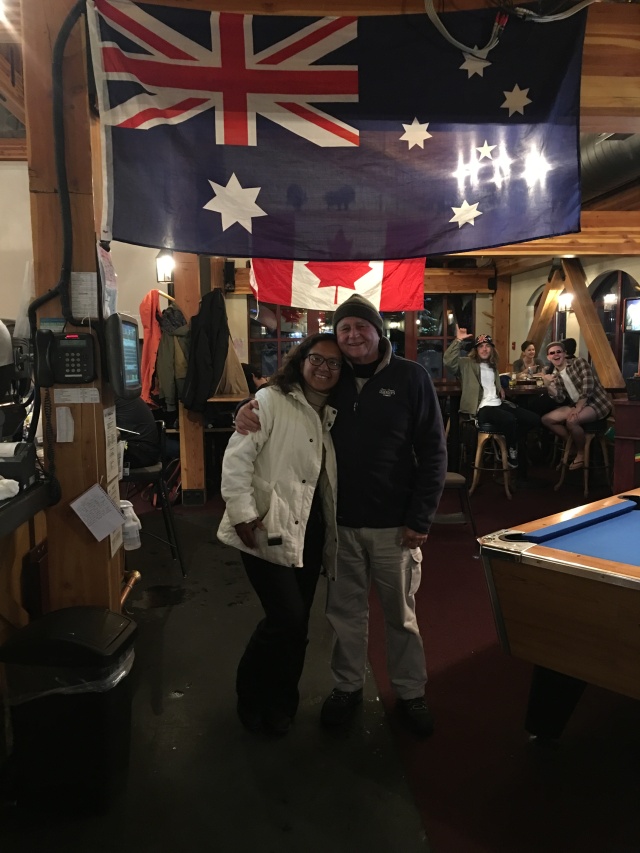 The rest of the time, I made the most of the large kitchen at the townhouse. Fully stocked with every utensils imaginable, to my delight the pantry also contained an entire assortment of spices, teas and baking ingredients. So I went to town cooking apple pies, granola, quiches, pasta bake, steaks…and because sharing is loving, we invited Yogi and family a few times for apres, dinner and a kid’s sleepover. This was the occasion for me to concoct big batches of roast chicken and potatoes, as well as vegetable curries which married surprisingly well with the pizzas our guests brought over. Who would have known?? 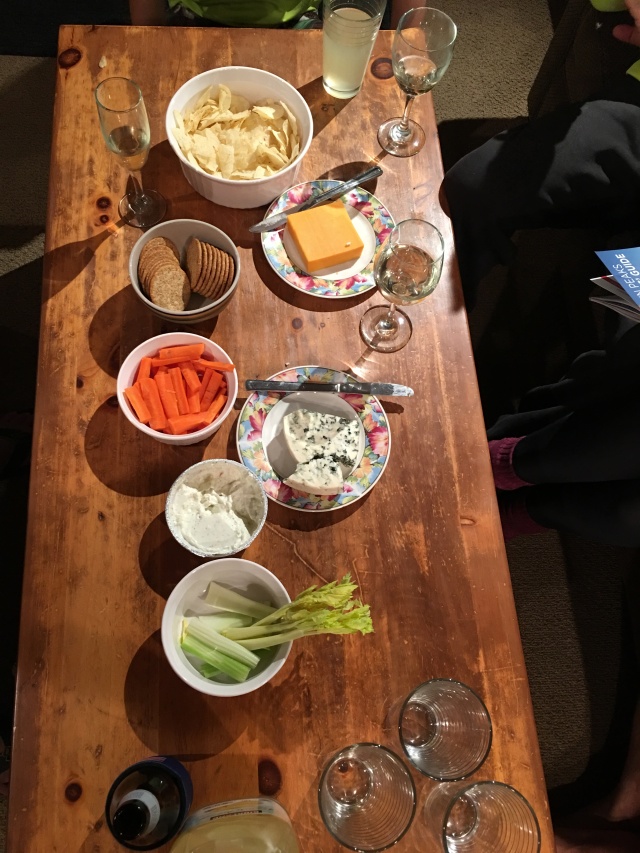 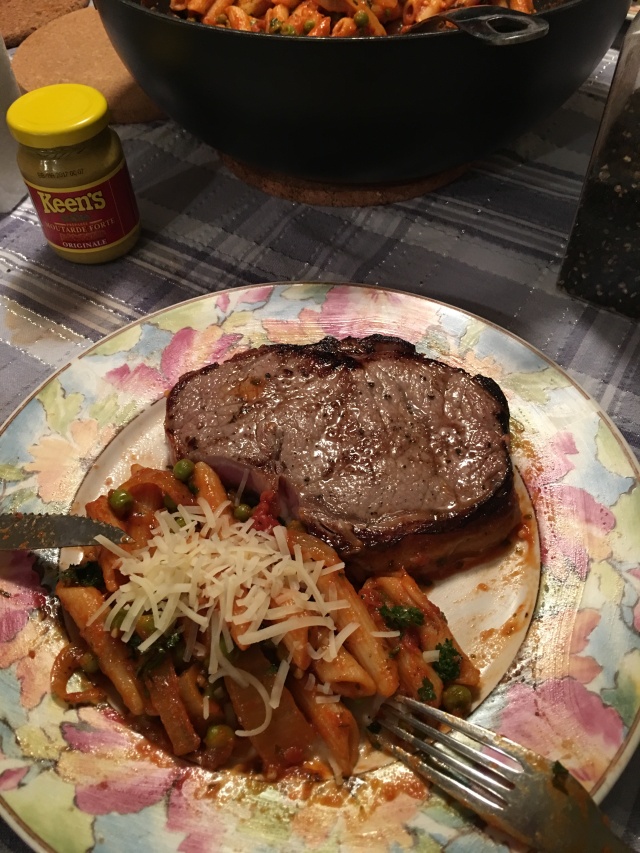 By the end of the fortnight, in spite of the daily skiing exercise, the carb-loaded diet is taking its toll. While I feel fit and strong ( not even a hint of soreness, touch wood!), I really can’t stand the thought of another hamburgers or even pizza. Nor do the the kids, who even concede that they have tasted enough poutine for a lifetime, both agreeing that the best version was in Whistler’s Rendez Vous. We all try one last attempt at Canadian gastronomy, as we wait for our domestic flight in Kamloops airport: a very stodgy version of Pierogi for me and a Chicken Tandoori wrap for Marc. Mine is basically dumplings stuffed with mashed potatoes, and Marc’s turns out to be filled with more rice than chicken, talking about carbohydrate overload….So what do we pick for our last meal at Vancouver airport: salmon sushi roll for Anne, tuna poke for Marc and seafood platter for Terry and I. The bread remained untouched. 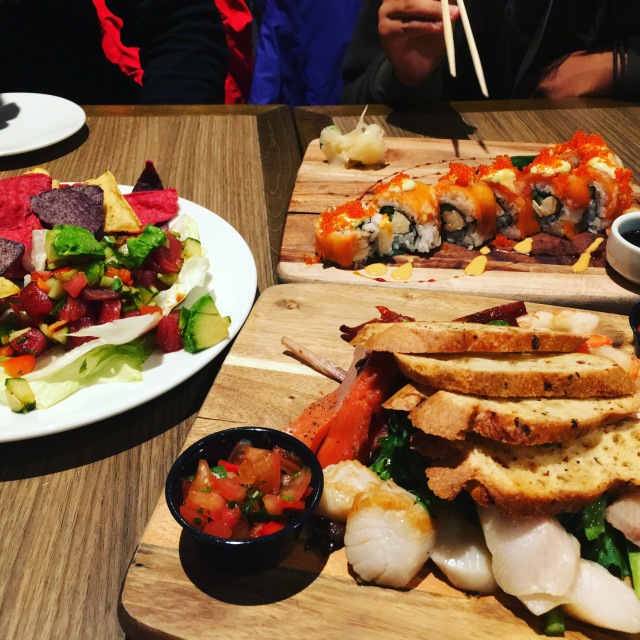 As the time approaches to board our 14h flight back to Sydney, my phone beeps with a message from Yogi: “snow falling at last! Looking forward to fresh powder tomorrow!” I wish I was too… 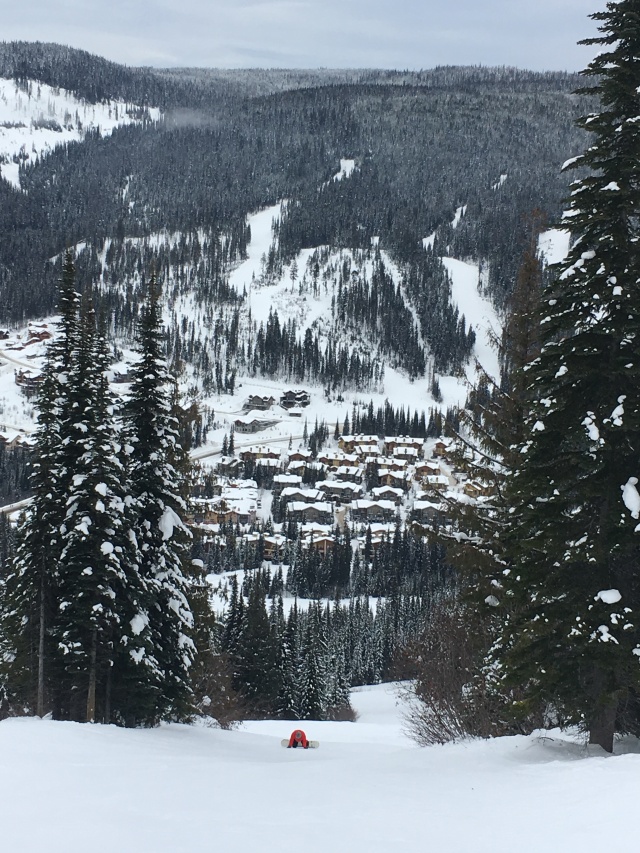 ← Skiing holidays in Canada – Part 1
Fried Chicken and tacos: how to please a teenager →

Leave a Reply to Lorraine @ Not Quite Nigella Cancel reply